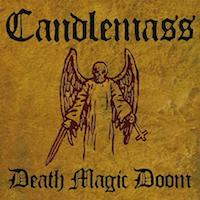 Death Magic Doom; this three word title is borrowed from Dimmu Borgir, isn't it? The cover artwork is reduced to its essentials and can therefore also not be deemed as a triumph of creativity, although the simple symbolism never fails to have an effect on the beholder. Anyway, the Swedish legend does not need any kind of visual antics. The heavyweight sound of mastermind Leif Edling and his sidekicks speaks for itself. First of all, it goes without saying that I do not need to blather about the musicianship of the five band members. Everything is well implemented, every cog intermeshes perfectly with the next one. In particular the sublime performance of lead vocalist Robert Low is simply impressive. Generally speaking, doom is not my passion, but Candlemass have the ability to fascinate me again and again. Despite its blatantly typical title, Death Magic Doom marks no exception.

The album shows new variations of the usual trademarks of Candlemass. A dense and majestic sound is the prerequisite. Its flawlessness lays the groundwork for the dark anthems of the band without killing the dynamic of the songs. Despite the density of the production, the band is always able to intensify the atmosphere of the tracks in a matter of seconds. The instrumental part of 'House of 1000 Voices' is a good example in this context. Experience how this song progresses between 3:41 and 4:58. To avoid misunderstandings, the entire track is worth listening to. Yet this is nothing special. Each and every song reveals its mightiness, albeit in different ways and to different degrees. 'Hammer of Doom' is the prototype of a profound and poignant doom song, the mid-paced 'The Bleeding Baroness' combines heavy verses with a melancholic chorus and the opener 'If I Ever Die' marks the "high speed" track of the album. At this point, I must criticise the band for the arrangement of the running order. Positively expressed, 'If I Ever Die' stands in the tradition of more or less rapid openers like 'Black Dwarf' and 'Emperor of the Void'. But, frankly, this beginning is predictable and the entire album lacks a bit of surprising elements. After all, the fairly weird 'Demon of the Deep' presents an unexpected final part.

In my personal ranking, Death Magic Doom stands in the shadow of its two predecessors. But Candlemass and King of the Grey Island were true masterpieces and one cannot expect that this quality can be repeated endlessly. The more important thing is that the album is free from lukewarm fillers. Even less impressive numbers like 'Dead Angel' with its pretty harmless, almost cheesy chorus and its vapid ending have their moments. In the case of this song, the drilling guitars during the verses keep the piece above water. However, the last regular track, 'My Funeral Dreams', leaves no doubt that Candlemass are not willing to make space for another group at the top of the doom scene. Its dramatic and genuine configuration gives no reason to moan and the strong bonus track closes the loop in view of its relatively fast tempo. A good record, but definitely not the most shining pearl in the discography of the Swedes. Even the fact that the limited edition comes with a bonus DVD does not change this situation.