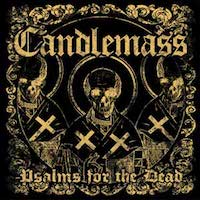 Buy on: Bandcamp
Type: Full-Length
Release Date: June 8th, 2012
Label: Napalm Records
Genre: Doom, Heavy
1 Prophet
2 The Sound Of Dying Demons
3 Dancing In The Temple (Of The Mad Queen Bee)
4 Waterwitch
5 The Lights Of Thebe
6 Psalms For The Dead
7 The Killing Of The Sun
8 Siren Song
9 Black As Time
MetalBite on YouTube

Back in 2012, Psalms for the Dead was announced as the final album of Candlemass. How we love these nice promotion gimmicks. Either way, I bought this supposed legacy of the only doom band I really like. Pretty strange, I know why I do not like doom in general - I miss velocity and energy. But honestly speaking, I do not know why I enjoy exactly Candlemass. Well, at least their more modern full-lengths are surely not doom metal in its purest form. "Dancing in the Temple (Of the Mad Queen Bee)" almost flirts with pop in view of its very smooth, pretty melodic flow and the radio-friendly playtime. Nevertheless, slow or mid-paced rhythms still prevail and "energetic" is definitive no word that comes to my mind when listening Candlemass songs. This band scores with other features.

Robert Lowe's voice, for example, does definitely not suffer from a lack of charisma. From time to time, he sounds slightly cheesy, not only during the calm verses of "Waterwitch". But mostly he celebrates a powerful approach. He manages to appear trustworthy and a little bit demonic at the same time and while doing so, he matches the musical ideas of Leif Edling very well. Speaking of Leif, once again the only composer on this work, his riffs come up to my expectation. This experienced dude seems to have no problems in separating memorable from rather ineffective riffs. Or, second alternative, he writes one and the same riff again and again. Nobody knows it exactly! Psalms for the Dead has some sections that sound extremely typical for the Swedish authority. That's okay, but this recipe does not work in order to bring another classic to life. Given this situation, the "farewell album" cannot compete with the best outputs of Edling's doom machine. Well, that's how it goes if you have released fantastic works in the past.

Nonetheless, the songs rely on a stable substance and the technical execution is well done. Candlemass present their relatively dramatic tunes in a voluminous, warm and vigorous sound. The Hammond organ and the keyboards add a seventies feeling occasionally. I am no big friend of this decade, to say the least, but no rule is without exception. Maybe the synthetic solo in "Siren Song" is a little bit too much. However, we don't want to be too picky. The spoken intro of the closer is also dubious ("tick-tock tick-tock..."), but I guess I am at risk to get lost in detail. More generally, Candlemass find the balance between heaviness and melody very well and therefore it does not matter that more or less all songs have the same pace. Of higher relevance is their powerful appearance and their sometimes gloomy or morbid ("The Sound of Dying Demons") atmosphere. Unfortunately, it cannot be ignored that the band runs slightly out of breath during the playtime of 50 minutes. The fifth track marks the last highlight. But taken altogether, Psalms of the Dead marks a decent album - but no worthy legacy. And this is only one reason why it is good to have this band back.