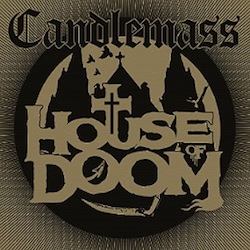 To say I was a huge Candlemass fan, is to state the obvious. I have been a fan for many years, and it has influenced my playing.  I have also had the pleasure of seeing them live twice – something that was amazing.  So when I saw I had the chance to review the latest album from them, even though their last few ones were not ones I would have recommended but were not overly bad either.

I will not get into the long history of the band here, only to say that the latest incarnation (Leif Edling; bass, Mats "Mappe" Björkman: rhythm guitars, Lars Johansson: lead guitars, Jan Lindh: drums, percussion and Mats Levén – lead vocals) is not one of my favorites. They seem to be trying to keep the bands signature style and the added bonus is this EP which is the soundtrack for a on-line game of the same name (slot machine styled).  I will not be commenting on that here, the music is my only true focus.

Through this is four song outing, I listened carefully.  I could feel that the old school vibe of the band was coming back, but still it was not there.  Vocalist Mats Leven is more than capable, but I could not help but think that if past vocalist Messiah Marcolin was the at the helm fronting them, this would make it from average to epic.  The songs and music are stellar but the vocals seem to drag them down, and sap some of the power from them.  As their style reverts back to classic, the songs get more power and this is good for all doom fans, as well as all metal fans.

Candlemass is back, as founder and bassist Leif Edling returns from taking time off due to an illness and has delivered a very good album.  In my opinion, with the right vocalist, this could have been so much better than what has been offered up – yet it is what it is. Still good.

In a country more renowned for its contributions to the death metal movement of the late 80's and early 90's, Sweden's doom-legend Candlemass has hardly let up one iota over the last 33-years. Endless debates over which of their early albums, Epicus Doomicus Metallicus or Nightfall, is the more influential album still run rampant today on many a forum and social media post, much to the delight of many an old school fan. Such staying power must wield some sort of resonance after so long, and it does just that.

The latest offering is an EP titled House of Doom, an otherwise telling, if unnecessary tag considering the lineage of this group, but, alas, I am here among the masses awaiting the dark and empowering chords to hit me, and the titled track opens up quite nicely. The immediacy of the power chords is a staunch reminder of this band's overall power is still sharp after so many years. Understandably, doom metal isn't a medium usually longing for consistent advancement, but even the best bands of the genre have hit 'cold spots' in their respective careers. Vocalist Mats Leven does a nice job of letting his vocal pattern guide him, as opposed to others people who try in vain to overpower the verses with showboating bellowing; his vocals are a sort of thin coat of varnish over the nicely molded surface laid down by the band. His range is just hearty enough to fill the room without the pretension of playing the part.

As the tracks move long into “Flowers of Deception,” Fortuneteller,” and “Dolls On a Wall,” the track signatures change evenly and enough to set apart the individual songs from one another; no two tracks suffer from repetitive sterility anywhere. The slow and moody “Fortuneteller”is an almost ballad-like dwelling in the chasm of doom metal that, on occasion, can lift the listener above the normal plane of listening enjoyment. Granted, it's no “Solitude” by Black Sabbath or “Watching From a Distance” from the U.K.'s Warning in terms of brilliant anthem-like stature, but it's a soft and lulling dance over the furious D-chord dirges we're often used to in large doses.

The EP ends with “Dolls On a Wall,”an instrumental that, for me, was the perfectly logical exclamation point on this short little effort. Taking nothing away from its own powerful presence, to see an offering end with a good instrumental isn't all that prevalent these days, so this was a welcome surprise. It pretty much moves along with the same train of thought for the nearly-four-minute climax, but as with any inspired, finely-crafted  piece it gets in and out before any ideas are stretched too thin for their own good. It was a very well-executed exit.

When something has been moving along in its own easy labyrinth of excellence for so long, why tamper with the formula? As I said, doom isn't known for (successfully) taking chances over the last 50-years, but when it offers up a well-toned piece of musical machinery, it makes getting older seem that much less taxing. Candlemass has always been a band offering nothing but high quality, so I think it's a safe bet to put all of your chips on black when it comes to their long and fascinating discography.