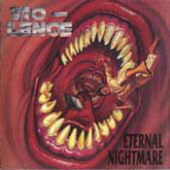 - get your bicycle,
- drive to the next record store,
- see a Repka artwork,
- buy the album in a matter of seconds,
- drive home on the shortest way,
- do not say hello to your parents,
- put the vinyl on your turntable immediately and
- start to listen, bang your head and play air guitar.

You guessed it, this is how the eighties worked. One of these albums was the debut of Vio-lence with the pretty individual vocals of Sean Kilian. While pressing many words in a line, he uses his normal voice and avoids high-pitched screams as well as an absolutely insane approach. Admittedly, he sees no sense in changing the pitch and he sounds less expressive than Paul Baloff or Russ Anderson. Nevertheless, his contribution adds value to the full-length, even though the guitar work is, of course, the crucial factor. Eternal Nightmare sounds as fresh and spontaneous as the first thrash albums that had been released a few years before. Its songs are not overly brutal, and they also do not overemphasize the technical skills of the musicians, but the output is built on a more than stable thrash fundament. This is remarkable, because some parts of the material have a pretty mid-paced approach. However, the guitars add more than just the necessary dose of sharpness.

The dudes from California did not focus on a high degree of catchiness. The great background vocals of "Bodies on Bodies" keep sticking in the ear. The band uses this stylistic device occasionally, but here it appears as a really strong weapon. The staccato shouting of the gang lends the song a special flavour. Yet this catchy element remains an exception. Vio-lence follow the pure rule of thrash metal. They let the riffs do the talking and it is almost needless to mention that these riffs have an impact. The guitars paint a dark and sinister picture, while Kilian tells his stories of death and paranoia. No doubt, this combination works excellently, although the quintet is not immune against a few instrumental parts which are going nowhere. However, usually the band forms strong sequences and the opening title track does not only profit from a triumphant yet evil introduction. This feast of rasping guitars marks a very strong beginning and underlines the rather progressive than primitive approach of the dudes. But don't get me wrong when reading the word progressive - Vio-lence were light years away from formations such as Watchtower. They just did not prefer conventional song patterns while flirting with complexity, sometimes more, sometimes less.

Maybe this is the reason why exactly their shortest track, "Serial Killer" fails to hit the bull's eye. It's no bad song, but compared with the more multi-layered pieces, it lacks dynamic and coarse elegance. On the other end of the quality scale, one finds "Bodies on Bodies" with its impulsive beginning, its meticulously designed configuration and the precisely working background choirs I already mentioned. They ensure the song's great finale. Even the malicious "Phobophobia" cannot fully keep up with this highlight, albeit it benefits from constantly outstanding riffs, leads and lines. By the way, all songs rely on a great production. This is the authentic sound of the sub-genre - and this means among other things that the bass guitar does not play a prominent part, but I don't care. So, what is left to say? People who enjoy the debut of Forbidden are well advised to check this classic that conveys the spirit of thrash successfully.

Too bad that
- my bicycle is rusted,
- the vast majority of record stores has not survived and
- some medias try to tell us that shit such as Sabaton is great.

Why the hell did the eighties come to an end?