US thrash legends Vio-Lence just released a new EP called "Let The World Burn" 29 years after their last full-length "Nothing To Gain". In my eyes this EP is a very uncompromising and brutal thrash release and quite fortunately I got the chance to have an interview with their guitarist Phil Demmel via Skype. So here you get to find out more about the release and some more info about the band and Phil's involvement in some other projects. Enjoy the read! 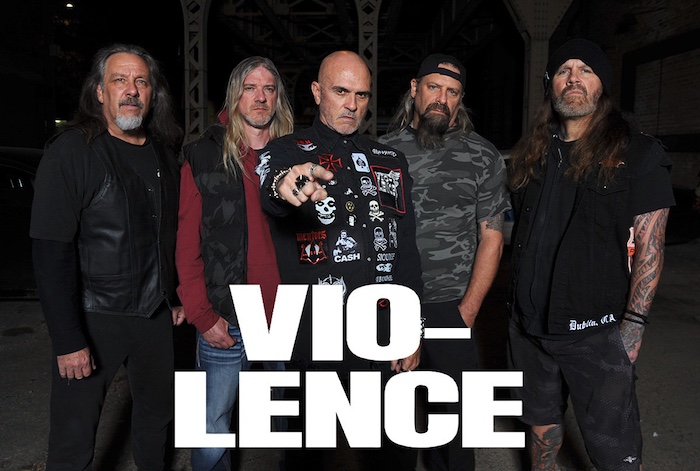 Hey Phil, how are you doing these days? How's Covid going on in the US?

It depends on who you talk to. I think it's pretty normal other than the kids have to wear the masks in school and our business is back to normal pretty much so everything's okay.

Vio-Lence is back on the stage of thrash metal since 2019. Maybe you can tell a little bit how this happened?

When I left Machine Head I'd filled in for Slayer really quick and then after that Sean asked me if I wanted to do when we get together do some Vio-Lence shows. So, we did in the beginning of 2019 we got together in Perry's (Strickland; M.) living room and started banging out some songs and have some fun. It was pretty rusty but pretty good. I've been playing pretty consistently but those guys haven't. It was pretty fun in this new kind of them discovering themselves as musicians again. We did some awesome amazing home shows sold out really quick and there was a lot of interest, so we started doing some festivals and going through the states and playing these cool things – we get these 70000 Tons of Metal cruise and played in Puerto Rico- so we had some fun for the first year. The it looked like we're going to take a step further and do some mini tours, record some new music and it turned out then that a couple of members weren't really up for that commitment and weren't able to move forward with us, so we brought in Christian Olde Wolbers from Fear Factory and Bobby Gustavsson from Overkill on board and wrote these five songs, recorded them and here we are man.

Did Metal Blade come to you and say "Alright guys, we wanna sign you" when they got to know about your reunion or how did you come to that label?

I think it was the opposite. I was in Vegas playing with the band Nine Point and I texted Brian Slagel, I think he lives there, and we talked about some things I was doing but mostly just like "Hey, I wanna do a Vio-Lence record and want a deal with you." Just give us an admire record which doesn't have to be any big deal with you. Just give us enough money to record, it doesn't have to be any big haggle over numbers, or anything like that. If you wanna put this out, we'd love to do it. I wanted to do it with that label that was so steeped in metal history. They were there from the beginning of it all. Brian Slagel has seen so many things (laughs) to metal. Metallica was on the first Metal Massacre record in the beginning of it all. It was that. I said we're thinking about doing some songs and he just said here we are. So, it was pretty easy like that.

In 2020 you released a single 'California über Alles' by Dead Kennedys and in March you just released a new EP called "Let The World Burn". Why didn't it become a full-length album? Did you have so few ideas in all the time to just write a five-track piece?

I was in for a whole record these days. I've listened to old records that I got through, but the attention spent now and I've got three kids at home and I didn't want to delete any of the material and I wanted to focus and really concentrate on those. I wanted to do three songs originally and they turned into four. One song I wrote – 'Upon Their Cross' – I didn't know if it's a Vio-Lence song or not. It didn't sound like a Vio-Lence to me, so I was getting to keep it for like a solo thing or one of my other things I was doing. Sean put these lyrics, this vocal line and this huge hook to it and it sounds so fucking good. It doesn't sound like any other Vio-Lence song we've ever done before. I just wanted to be those five songs to be perfect. I wanted them to be the focus. I didn't want people to lose focus and listening to a thrash band for more than half an hour it's a lot (laughs).

Can you tell a little bit more about the lyrics? Their music sounds quite brutal and so does Sean do, too. It reminds me quite a lot of the sound of Oppressing The Masses.

This is definitely a Sean question. Well, I know that 'Flesh From Bone' is about Vlad the Impaler and about war time and brutality. 'Screaming Always' is about today's sign. Everybody is just load and trying to make their point and screaming. 'Gato Negro' is about Edgar Allan Poes story "The Black Cat". 'Let The World Burn' (laughs) is pretty self-explaining, and I don't want to explain Sean's lyrics.

By the way, how is he doing? I read some time ago that he suffered from liver cirrhosis. Is all fine again with him?

He is. He really got healthy and got his strength back. When we were playing, I was pretty concerned that he would be able to because I've seen him before and he didn't look it. He was bloated, set a belly and really gaunt looking and really gaunt looking – he was deep in the throes of this. He got this transplant and I think there were some complications after, and it took a bit for him to really take it but he did. He got it together.

Who produced the EP? Was it one of Vio-Lence or was it anybody else who did it?

I think that we self-produced in the sense Juan Urteaga engineered it and we recorded all the basic tracks with him. He has done all the local handsome international acts like Exodus or Machine Head. I did the solos in my home studio and Bobby recorded some of his solos in Florida but for most parts we all tried to be at the studios with one awesome vibe and we got some really great performances with Perry and Sean whose vocals were done there. Then we had Tue Madsen who started to harden it and I think a lot of Swedish bands he mixed up came up great. A really aggressive raw mix, just what we wanted.

You have two new members in the band in 2020. It's Christian Olde Wolbers (ex-Fear Factory) and Bobby Gustavson (ex-Overkill). How did it come to this?

Like I said, we needed those positions filled and Christian was actually gonna fill in for some shows that Dean was not able to make it to so there someone asked him. Dean wasn't gonna be able to make it and then Covid hit, and everything ran away and he just became a permanent member. I kind of reached out to him because when Dean wasn't able to do some shows, I told the others: "Hey, I reached out to Christian, he is a monster bass player, total pro, loves Vio-Lence" so it was kind of a no-brainer for the guys. It's the same thing with Bobby. He was Perry's buddy. We all knew Bobby but Perry had close contact with him over the years and so Perry said: "Hey, I've got a guitar player ready to go". The same thing…. monster player both guys have the pedigree, the craft and they're awesome humans, good dudes to be around with.

Are you going to do some more video stuff or tour in the next months? What are your plans?

We did a video for 'Let The World Burn' which actually dropped probably just 20 minutes ago. So, it should just be live. We are gonna do the Bloodstock Festival, the Alcatrazz and we are gonna do some shows in the US with Coroner from Switzerland. We'll do some fun stuff!

In 2018 you quit Machine Head and joined Slayer on their final tour for some days. Why did this happen and how did you come to that honor?

Rob and I couldn't be in a band together anymore. The day after I quit, Gary needed to come home because his father was dying, and he wanted to come home and spend some time with his dad. I learned the songs and I went out and played with them for four shows (laughs). They needed a guy and I think Paul Bostaphs girlfriend had known that I was home or that Machine Head was home and available and so Kerry reached out.

How long did you take to learn the songs?

I got the call on Sunday, on Monday I went and picked up all my Machine Head gear because it was time to clear up my stuff from the studio and on Tuesday, I was on the flight to Germany to their last Berlin show. So basically, I was ready to play after a couple of days.

You are engaged as a live guitarist in Overkill. Will you also be playing on their next album or is it just for live gigs?

I'm doing some shows with Overkilll, I'm gonna do with them this tour in March. Whenever they need somebody, they call. Dave is not doing some shows and it's not really my place to say why or why not but for the shows that he is not in, I am when I can. There are some shows I'm not gonna be able to – the same with Lamb of God.

Finally, which thrash album (or any other one) that was released in the last couple of times has really blow you away?

Check the new Vio-Lence record out on March 4th – Let The World Burn and look for us doing some special shows here and there. Thanks for being Vio-Lence fans over the years and we're looking forward to rocking it!