The multi-talented Tom MacLean has been a fixture on the prog-metal scene ever since the release of To-Mera's brilliant first album Transcendental in 2006. Although that band went on hiatus some time ago, a long stint as the bass player in prog geniuses Haken, together with a number of other short-lived projects have ensured that his reputation has retained its lofty status. In recent years, MacLean has opened his own studio, Twelve Tone, with a view to lending his not-insignificant production, mixing and mastering talents to up-and-coming and established artists alike, and in 2021, his life in front of and behind the desk have come together in the form of Athemon, whose debut has just been released on WormHoleDeath. I caught up with Tom recently to discuss the genesis and future of this band, his thoughts on the recording process, and the prospect of a return for the much-missed To-Mera. 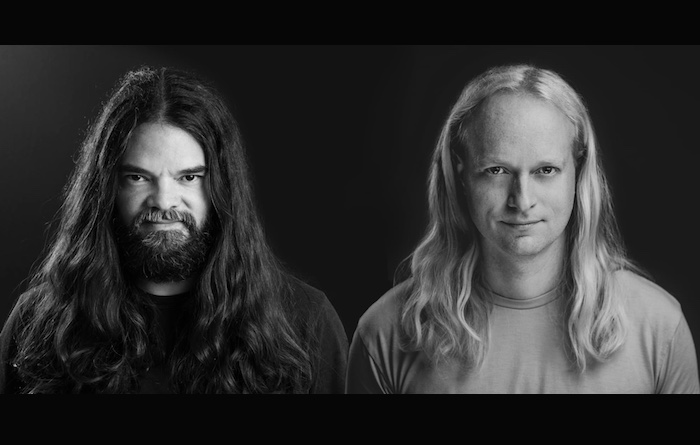 For the uninitiated, Athemon are the brainchild of Brazilian guitarist / vocalist Adriano Ribeiro, who put the enforced downtime of the ongoing pandemic to good use, writing and recording the band's debut. In terms of how MacLean came to be involved, and help shape the final product, as he explains, "It all came about because during the initial lockdown, with all countries simultaneously going into lockdown, I was finishing a distance-learning audio engineering certificate. Up until that point, I'd been reaching out to bands and friends that would be open to someone starting out on the audio side. I had loads of recording experience, but limited production and mixing experience – I'd always left that to someone else! There was some interest from local bands looking to record EPs, but when lockdown happened, that was postponed. And I thought, if I don't act now, I'll languish and fail to make anything of the engineering, not to mention the lack of any money coming in. So, I did some social media outreach, spoke to friends of friends of friends, and got plenty of contact through my website."

"Adriano was one of the people who got in touch – he sent me a Garageband demo, and I thought it was really cool. You can tell when someone's got a vibe going with their instrument, and I was impressed by his gnarly guitar tone. The guy's got some serious guitar chops! But the demo was just him and some programmed drums. It was exactly the kind of project I was looking for – someone who's obviously got some talent but needed some outside help. As with many projects during lockdown, Athemon wasn't yet a fully-fledged band. In this case, I volunteered to do bass, as it was something I wanted to get involved in. And, to an extent, that allowed me to influence the direction of some of the songs a little bit more and change the sound to something mutually agreeable."

One of the biggest changes that occurred during the recording process was a transition in the vocals, from the harsh growls of Adriano's death metal heritage to predominantly clean, melodic vocals. This change not only matches the slick, progressive metal perfectly, but adds some huge hooks that allow the record to become significantly more memorable than it might have been with a more one-dimensional vocal approach. As MacLean notes, the initial demo was quite different. "The vocals were a lot rougher, not unlike Opeth, but, at least in my opinion, didn't seem like the best fit. So we had some discussions about it and there were some intense Zoom calls! In the end, the vocals turned what would've been a solid album regardless into something that had an extra dimension to it Adriano had never really done clean singing before, but I think he really pulled it off."

What Athemon also pulled off, and very impressively considering it was their first attempt, is a record that feels like a unified and fully formed album, with a clear musical and thematic thread that runs from start to finish. The fact that the concept (an allegorical tale which uses the emergence of a butterfly from its cocoon to reflect man's journey to self-actualisation) and the majority of the riffs were already there before MacLean was involved suggests that even if Athemon are a new band, their gestation in Ribeiro's own mind has been a long one, with MacLean assisting the project's birth in masterful fashion, shaping and refining the results.

Athemon is sonically a high-end release, all the more impressive given MacLean's relative lack of experience. Good enough in fact, for WormHoleDeath to deem it ready for wider release. I asked MacLean how that particular connection was forged: "I didn't have any prior knowledge of them, but they got in touch. To be honest, I was grateful to have the promo and distribution taken out of my hands and put into the hands of someone committed, who could give it a broader reach." With everything in place, therefore, for Athemon to grow the audience that their music deserves, MacLean confirms that there are thankfully plans underway for Athemon to continue as an active band, even as the pandemic from which they emerged seems to be dissipating. Although there is no imminent prospect of live dates, we understand that "Adriano wants to develop it more –at least half of the next album is written, although he's keeping it to himself right now. I'm sure there will be more, and I'm definitely open to being involved in the next record."

One hopes that this is the case; the bass playing on the album is rarely less than spectacular, the legato runs bubbling through the spaces between the guitar and drums on songs such as 'Whispers' reminiscent of the kind of virtuoso brilliance that lit up the work of early Cynic and Atheist, and it comes as no surprise to hear that Ribeiro was keen to utilise MacLean's talents to add depth and sophistication to the recordings. "Well, Sean Malone was a big inspiration. But then you realise that Sean Malone is basically Jaco Pastorius (US jazz-fusion legend) on a 6-string bass, so really, it's Jaco Pastorius! Also, Adriano and Gledson Goncalves (drummer) are from a tech-death background – big Sadus / Steve DiGorgio fans, and if I was under-playing, they would ask me to make it more Steve DiGorgio!"

Clearly, despite the growing production business, MacLean is not yet done as a musician, even if the former is the current priority. He refers to the fact that in part, the audio training was designed to allow him to gain more control over the recording of his own music, but that this now inevitably plays second fiddle to the fact that business development is totally dependent on demand, and if the demand is there, needs must! Whatever comes next though, it will not be Psion, another prog-metal beast, featuring ex-Dodecahedron drummer Jasper Barendregt. Psion released a single EP in 2017 and promised at the time to be another exciting chapter in MacLean's career. "Psion was a really tricky project. Four strong personalities, myself included, and it was so agonisingly slow. The record should've come out in 2015. Musically it had potential, but as soon as it was released, that was it. Brian (Ramage, from Ramage Inc) is a monster singer, but Brian needs to be Brian, and do Brian. To be clear - what he laid down for Psion was phenomenal and we're so grateful he was a part of it, but it was understood early on that Ramage Inc is his focus. That's his everything. Ultimately, the band just turned up at the wrong time in people's lives."

MacLean is, slightly surprisingly, a little warmer on the prospects of To-Mera returning from exile and reveals that he has been writing during lockdown with their erstwhile singer Julie Kiss (ex-Without Face). "I wrote a few songs with Julie over lockdown, and we're trying to figure out what that will be. We did a pop-rock thing called Euphonia a few years back, but there was no real gameplan other than trying not to write a metal song. That didn't have a clear direction, it was an experimental, self-indulgent outlet. The new stuff is promising; I don't know if it will be a new To-Mera album, but, given the overall vibe with the new stuff – it would tie in with the "Exile" album."

For now, though, the priority is responding to the strong demand for production and mixing work, even if some bands are looking for something a little out of their price range! "It's really tough. I want to develop skills-wise and work with better musicians. However, the people at that level… the records have all been mixed or mastered by two or three guys. It's either Jens Bogren, Jacob Hansen or Andy Sneap. Nevertheless, everyone wants their albums to sound like that, but for a tenth of the price! I wonder if the pre-eminence of a small number of mega-producers in the genre acts to homogenise metal, and limit individuality, but MacLean doesn't see it that way. "I used to think exactly that. I thought the drums on Andy Sneap records were too hard, or Jens Bogren was always using the same snare sound. But I think that through being on the other side, what I realise is that in the end, engineers are always trying to do what the bands ask them to do. It's not the engineers pushing it. There will always be input, but it's the band's decision." Not that a lack of direction is necessarily any better though: "Well, sometimes people say 'Whatever'. They have no opinion, and you're freaking out!"

Before we close the conversation, I'm interested to hear what MacLean is listening to currently, hearing things as he does with the ear of both an artist, and an audio engineer. I unreservedly endorse his choice, which is the Converge "Blood Moon I" collaboration with Stephen Brodsky and Chelsea Wolfe. "It blew my mind out of nowhere. It's a colossal sounding album. I'd always been on the fence with them. It was a bit what I was expecting, but in so many ways it was just something else." It's fascinating to hear MacLean so enamoured with a record that, superficially at least, has little in common with the symphonic prog-metal that he is most associated with, and one hopes that just a little bit of his new-found love of Converge will bleed into whatever comes next for the man himself, be that Athemon, To-Mera, or something completely different.

If you have read this, and want to utilise some of the skill that makes Athemon's album such a compelling listen, you can find Tom MacLean's audio engineering studio here: https://www.twelve-tone.studio/