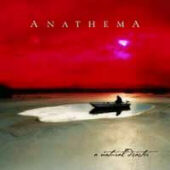 Anathema has been on a never-ending path to success since they began over a decade ago. I'll spare you from their well-known story of doom and gloom to, well, rock and gloom (more or less), other than to say that they've been improving with every release since they found their niche. Unfortunately, "A Natural Disaster," Anathema's follow-up to 2001's magnificent "A Fine Day To Exit," isn't as brilliant as its predecessor.

Despite the initial letdown, "A Natural Disaster" is a good album – I promise. There isn't too much to get upset about, other than that it's not Anathema's best album yet. Not that we were all expecting it to be. I suppose it's just the fact that they are capable of doing much better.

"A Natural Disaster" has basically fallen victim to the same thing "Eternity" did. The first half is pretty good, and the second half is more or less excellent. Those first five songs, while fairly good in their own right, bring the album down as a whole. I really just want to get through the incongruous 'Are You There' and the futile interlude, 'Childhood Dream,' and jump right into the energetic 'Pulled Under At 2000 Meters Per Second' with it's 'Panic'-esque, claustrophobic, driving rhythm, or the beautiful female vocalist on the emotional, heartfelt title track, or the beautiful melodies and the simplistic yet perfectly fitting solo on 'Flying.' The last two songs are quite excellent as well – 'Electricity' gently flows along with soft piano and warm vocal melodies, and 'Violence' nicely continues that pattern before launching itself into a forceful climax and ending the album with a calm soundscape of sorts. However, it's the first few songs that just don't seem to help move the album anywhere.

Individually, the songs are very well composed. Anathema really started to perfect their seamless, cohesive style of song writing that focuses on crafting songs that build off of themselves on "A Fine Day To Exit." "A Natural Disaster" stresses the importance of this once again, and the results are great. However, there's a bit left to be desired in the overall continuity of the album.

"A Natural Disaster," despite being disappointing, is still easily one of the better albums to come out recently. My harsh words are only due to the high standards that Anathema have set for themselves. It's still a highly enjoyable album that deserves a place in every Anathema fans collection.