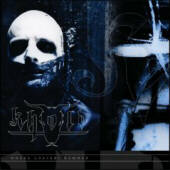 If you liked the previous album, Phantom, you'll get a lot out of Mørke Gravers Kammer. The songs are more cohesive overall and make for superior record than what Phantom was. However, the same goes if you were sitting on the not so chirpy side of the Phantom fence, as nothing has changed dramatically enough for me to recommend Mørke Gravers Kammer to those who weren't overly nonplussed by what Khold have fashioned in the past.

One thing that never ceases to get old or tired for Khold is the work of Gard on vocals. His interpretation of the black metal style vocals is simply wonderous to behold. I swear if this man released a solo-vocal album I would be the first at the counter for his gurgles, gargles and croons in Norwegian. What else do you need for a dark and morbid black metal record? In all honesty, I don't think there is a better pure vocalist going around in black metal at the moment.

In looking at the plusses of Mørke Gravers Kammer over Phantom it's pretty easy to identify that they've certainly raised the atmosphere a notch or two. Phantom was a bit bland in many respects and I'm certainly glad to see that Khold have created a record that tells a story with a varied amount of atmosphere and feeling within. Certainly production stakes have improved, as you would expect with each subsequent record from a band in the music industry. Mørke Gravers Kammer has a fuller and meatier sound that what was presented in the past.

Still, I can't help but feel disappointed with Mørke Gravers Kammer. Khold are one of my favorite black metal acts, if just for their consistency in the black metal world. This is a good album, but it doesn't push the envelope enough for my tastes. And perhaps this is the problem. Was I expecting too much from Khold? Or more to the point, was I expecting the wrong things from Khold? Who knows, but the follow-up to Mørke Gravers Kammer should convince me.

I'm a little bit dirty at Khold for not challenging themselves enough to push on with their sound more. Everything on Mørke Gravers Kammer is a little too safe. Predictable songs with the trademark Khold stamp of grimness. However, that being said Mørke Gravers Kammer is the sort of record that you'll have a lot of fun with if you like gurgling black metal. I'm expecting big things for record #4.