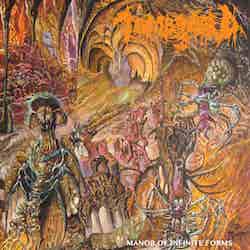 Manor of Infinite Forms is 40 minutes of death metal that is played in vein of the old school era and occasionally veers off into doom metal whilst taking notes from Incantation. Solid songwriting, death metal growling mixed with yelling barks, small portions of technical drumming that venture into thrash metal dominion and guitar solos that match the pace and feeling of the album instill the listener with the feeling of completion and coherence. Having heard Tomb Mold’s 2017 effort titled Primordial Malignity I became interested in what else they had in store. To my surprise, 1 year and some months later we have a second full length offering from the band. I don't know how I honestly feel about this early release; my thoughts are saying 2 things right now, 1) either they have an unquenchable desire to stay active in the production of new material on an often basis or, 2) Manor of Infinite Forms is a collection of B sides and unreleased demo material that didn't qualify for their 2017 album. Currently it leans towards the latter ambit of my surmises, hence the title Manor of Infinite Forms which implies difference by the use of “Infinite”. Usually that could turn out to be a bad thing when bands release full length records or demos within a short time span of each other, for fans of the music may interpret it as a rushed or forced effort thus causing disinclination. I thought this release could have waited for at least another year; not to say the music is bad or lacks merit; it feels too much to digest between now and then. However, despite being such an early release, it does live up to the task of delivering a well rounded and improved version of Primordial Malignity. Their 2017 effort was “ok” and did grasp my interest (thanks to “Merciless Watcher”) but never stood out to me out as a defining record in Tomb Mold’s career. It possessed one good song that I liked and though everything else on the record was decent, it sounded all too unsure. Had I written a review of Primordial Malignity it would have received a score of about 6.0. Manor of Infinite Forms addresses and rectifies some of the issues that adversely impacted their 2017 debut full length album.

My main problem with Primordial Malignity dwelled within the songwriting department; apart from “Merciless Watcher” every other track felt very aimless and devoid of any purpose. More times than often the music would shuffle around and prong at alternate directions that never contributed towards improving the compositions. Songs would begin convincingly then for no reason, drastically change tempos almost in an experimental fashion. This is done to far better effect on Manor of Infinite Forms. Whenever a different rhythmic path is introduced, the listener knows that the same song is being played but with mildly varying instrumentation. There is a far greater amount of coherence and harmony in each section of the tracks. “Gored Embrace (Confronting Biodegradation)” can be cited as an example of such improvements. It begins slow in tempo then rapidly builds into a faster thrashier version of the opening moments. The guitar riffs are different during this transition, but they match and adhere to the initial model of the music. There is no structural disillusion when addressing the methods (beit doom, death and thrash) derived to create and complete the compositions; each offering is confidently presented and withstands the challenge of retaining the listener’s allure for its respected duration. This is a major improvement in my books, being able to deliver a lengthy yet enjoyable and engaging body of work is no easy feat when taking into consideration the short attention span of human beings and the fact that this is death metal that has been done before by many bands. What Tomb Mold has essentially done here is revisit their previous album, trimmed all the unnecessary edges and elaborated on the memorable facets of that release.

The 2nd most persistent impediment of Primordial Malignity lay within the guitars; not the members ability to play, but the sound. The riffs, solos and pinch harmonics on that album sounded very thin and stringy in comparison to the loud bass, drums and vocals. I don’t know if that was an effect of compression, however; one can definitely identify the attenuated sound it generated. It’s quite disappointing due to the fact that some of the riffs on that album were very tuneful, for instance on the self titled track and on “Merciless Watcher”. Had the production been beefier, the songs would certainly have had a greater appeal. In major disparity to Primordial Malignity, Manor of Infinite Forms possesses a louder and robust sound to the guitars and the overall album. The notes from each instrument being played pops out vibrantly thus reinforcing a sense of confidence and purpose within the band. Songs such as “Two Worlds Become One” and “Blood Mirror” take advantage of this improved production, given they are the lengthiest on the album with more varying guitar leads and riffs. Manor of Infinite Forms is the album that should have been released as Tomb Mold’s full length debut because it executes most aspects with better precision and production. The guitars are brought forward, the vocals still sound catastrophic and the drums add another layer of depth to the already rich gulping resonance. Despite my feelings that suggest Manor of Infinite Forms is a collection of B sides and randomized demo tracks, I can’t ignore the fact that the instrumentation beckons immersion which may disprove my initial claims. Manor of Infinite Forms is a better effort from Tomb Mold; it will be interesting to see how it holds up against other death metal albums both released and upcoming.