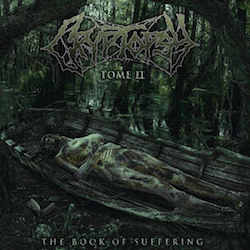 So three years have passed since Cryptopsy released Tome I, and to me it seems like only yesterday that I put it on for the first time and was once again blown away by one of my favorite bands of all time.

Those who know me personally will know how much I love Cryptopsy and may think that this is going to be a biased review, but like all my other reviews, it’s surely not. Cryptopsy are one of those rare bands I expect perfection from - a bit unfortunate for them, sure, but hey, they’re the ones who set the standards so impossibly high ever since None So Vile hit the streets back in 1996 - hard to believe that it’s been nearly 23 years since then.

Tome I to me was incredibly impressive. It was a very welcome return to form - Cryptopsy doing what they do best, and the fans ate it up. Even after all these years I’m not 100% sure just what it is about these guys, but Cryptopsy is a band that I just crave, and that no other band can seem to reach that itch. Some bands come close but can never quite hit the mark. That’s just a very long way of saying that no one - absolutely no one - does it like Cryptopsy.

This EP is especially important to me for a number of reasons I’d like to go over. First, my expectations were quite high after Tome I. Second, this is the first time in a long time where I feel like the band has now gelled completely. They’re tighter than they have ever been, they’re tighter than an air lock. Not sure how that’s even possible but it is what it is, there’s no denying how good these guys play and sound together. And something I never do in my reviews will be to talk about each individual band member, but for this release I believe it’s necessary before I dive into the music.

Guitars have always been a huge part of the Cryptopsy sound - of course - because the playing and song writing has always been so unique. In the past we’ve had the amazingly talented hands of Jon Levasseur on the fretboard, and to a lesser degree but still completely capable Alex Auburn, who joined the band just in time for the jaw dropping Whisper Supremacy in 1998. But ever since that chemistry was broken, the band has had a hard time finding a suitable replacement. And to my amazement, it’s already been 10 years since Christian Donaldson joined the band as their new guitar player. That said, this is the first time I’ve thought of him as the guitarist for Cryptopsy - the legit, extremely talented and creative guitar player for a legendary band. I must raise my glass to Christian - he came into the band, put his head down, and worked. He tried to do his best and just got better and better until he reached the point where he is at now - mastermind of guitar wizardry for Cryptopsy. That is no small achievement. The man has earned his place and is dishing it out with the best of them.

Perhaps the most controversial aspect of Cryptopsy’s sound has been about the vocals. You have the Lord Worm die hards on one side, and… that’s pretty much it. I still hear people wanting him back in the band. When Mike DiSalvo stepped in for Whisper Supremacy (who was personally recommended by Lord Worm, by the way) I thought he did an amazing job. After Mike we had Martin Lacroux who only performed on a live album, with mixed reactions. Then perhaps as a treat, Lord Worm returned for Once Was Not, did an amazing job, and left - leaning all his fans confused. Who we were introduced to afterwards did not go over so well - especially considering that we just had Lord Worm - Matt McGachy. And if you thought Christian had big shoes to fill, then just try to imagine what Matt must have felt like, especially if you think about how poorly The Unspoken King was received. Honestly, it must have been hard as hell to have gone through that. And to be frank, most of us metal fans are just assholes - we rarely have the patience to give someone new a chance.

But now when I think of who does vocals for Cryptopsy, my brain doesn’t automatically go to Lord Worm anymore. It lands and settles on Matt McGachy, and to be completely honest, this makes me very happy indeed. Like Christian, Matt just put his head down and worked. He tried to improve himself and he didn’t quit. He’s taken it to the point where I now consider him not just a decent, but a great vocalist. I had already warmed to him more because Tome I, but this time around he does an even better job. Earlier in the year he performed with Soreption and laid vocals down for the truly stunning “Virulent Well” - also well worth checking out. The vocals he provides for this EP are just spectacular in parts. The insanity at the end of “The Laws of Flesh” anyone? Matt is not just “the new guy in Cryptopsy” anymore - he’s a force to be reckoned with. My respects sir. Good job.

Don’t worry about bassist Olivier Pinard - the man is just an exceptional bass player however you slice it. Having Neuraxis in your pedigree also doesn’t hurt, and now he’s also picked up bass duties for Cattle Decapitation as well. Not surprising at all knowing how capable the man is on his instrument. So, throughout this EP, you can expect all sorts of craziness played at lightning fast speeds. Things that will make your fingers just want to flat out give up.

And if you shouldn’t worry about Olivier Pinard at all, then you should worry even less about Flo Mounier. The driving force behind the band for who knows how long now, Flo never ceases to amaze me. We all know (at least, you should ALL know) how excellent of a drummer he is. If you’re not familiar with that fact, then I’m not sure what you’re even doing here. The thing about Flo though, is that in a twisted turn of events, age has not slowed this guy down. Time has not dampened his performance but has just enhanced it. No doubt it’s a lot of just plain old hard work on Flo’s part, but there is something undeniably special about this guy. Watching videos of him from ten years ago you would think wow, that’s just absolutely crazy. The craziness has been toned down ever so slightly for this EP, but it’s still stuff that most people could only dream of pulling off. The real magic is watching him do it, though - he makes it look completely effortless, like he could also be thinking about his tax returns while he plays, and you’d never know. His form and posture are absolutely spot on - his shoulders are always at the same level, back straight, hands firm, steady and strong - Flo is not someone who just limps into the kit either - the man hits hard. Always a pleasure to listen to, I thank him again for his performance not just on this EP, but for his performance and style in general. I just love this man’s drumming. And while I know it’s not a competition - no one is on the same level as Flo. Sorry all you other amazing drummers - most of you can be lumped into a certain category of player. But you can never categorize Mr. Mounier. His level is his own.

All four songs on this EP manage to be intricate and absolutely devastating at the same time. While the arrangements may seem straightforward at first, yeah, they’re really not. Cryptopsy has always done that, don’t feel bad. You’re not catching everything within the first few listens, not a chance. Beneath the seemingly chaotic, unrelenting maze of guitar and drums, there are intricate levels of details going on - all sorts of details. Take a look at “Sire of Sin” for example; the song has breakdowns in it sure, but they’re not your traditional breakdowns. The song only has one big, major breakdown, letting you think that what you all heard just previously weren’t breakdowns at all, but just momentum and chaos for the one real breakdown in the song. Cryptopsy loves playing around with their arrangements and I hope they never stop. It’s what makes them what they are. And while there are only 4 songs on display here (it is an EP, after all) all 4 songs are very densely packed with material and ideas. It’s pure energy from start to finish, its dazzling but never exhausting. Not sure how they do it. While no disrespect to a band like say, Spawn of Possession, listening to more than two songs in a row can sometimes feel like a chore. This here, is not the case. There is just too much going on to comprehend all at once, and that's what makes it more enjoyable.

That about wraps it up. I am incredibly happy to have heard this EP and it’s a Cryptopsy release I’ll treasure. And since it’s the first time in a long time that I am perfectly content with the line-up, I’d like to see them dish out a whole album of this next. While I appreciate what they are doing with the Tome EP’s, I think a full release is in order, especially when they so obviously have the momentum pumping through them these days.

Coming from a Cryptopsy fan who’s been around since None So Vile, I’d say that this is not to be missed. It’s an excellent mix of Blasphemy Made Flesh, Once Was Not and a touch of And Then You’ll Beg - all delivered in a fresh approach, killer sound, and even better musicianship than ever before.

This, people, is how it’s done.