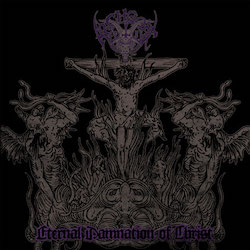 Archgoat [pronounced arrr-goat] has a really interesting history about them. They were formed in Finland as early as 1989, recorded a couple demos in '91 and '92 respectively, put out an iconic EP in '93, then fell silent for years until 2005 when they recorded another EP. It wasn't until that over decade long period of inactivity when founders Lord Angelslayer and Ritual Butcherer released their first ever full-length titled Whore Of Bethlehem in 2006. Their first EP has a mystical quality to it that makes it special in the underground where they happily continue to dwell to this day. Those thirteen minutes of soul destroying riffs, apocalyptic drums, and demonic vocals proclaiming the perverse desecration of the Judeo-Christian faith turned Archgoat into a cult name in the underground black metal scene, and for good reason.

Those unfamiliar with Archgoat's sound wanting a simple description will be hard pressed to find something like that. It's very difficult to merely describe without flailing over ones words. Imagine Sarcófago, twist the riffs to make them even more demented, take a hint of Blasphemy's or Beherit's vocals and overtly Satanic lyrics, and jam in the raw speed and intensity of Hellhammer (or early Celtic Frost) and you've got yourself something in the ballpark of what these guys sound like. Archgoat is one of those bands you have to hear for yourself to find out whether or not it's for you. Archgoat demands full attention and a formative knowledge, understanding, and appreciation of black metal, especially the diehards in the black metal underground because that's who this band was made for. The diehards. The "trve kvlts." The purists. You'll either sing their praises from the highest peaks or viciously despise them with a burning passion, and they don't give a fuck which way the wind sways your opinion. Listen to interviews with the band. Absolutely no fucks are given to the sensibilities or cares of anyone who thinks ill of their style of music. They make music for the true black metal fans. No exceptions.

Many relative years of silence, concerts, albums and EPs later, their latest LP is dropping this year and I cannot wait. In preparation, I've decided to review this short EP released digitally on the band's Bandcamp in late 2017. This compact, very brief package composed of only two songs totals a mere eleven minutes of music. If this were any other band releasing this little material and selling it, I would balk at the idea and promptly keep my money. However, this is Archgoat we're talking about here. We're talking about unrepentant, unholy batterings with a column of fire and thorns. They fucking deserve my money. Plus, it's cheap.

'Black Mass Mysticism' opens with a set of doomy riffs and contorted bass lines that give the listener an uneasy feeling as it sets the stage for the hellfire to come only seconds later as the drums creep right along, pounding you into submission. From the very beginning of their career, Archgoat have always been masters of setting a mood of pitch darkness and pure evil. This song is no exception. It continues on with a mid-paced tempo with Hell on Earth riffs from Ritual Butcherer, uncompromising vocals and vile, disgusting, rumbling bass lines from Lord Angelslayer, and the keyboards providing a perfect atmosphere as they sit atop the rest of the instruments to create the ultimate feeling of an unholy Satanic ritual unfolding right before your eyes, black cloaks and all, mysterious figures chanting ominously, "Hail Satan.... Hail Satan.... Hail Satan...."

The second and final song is the fastest song on here, though it still stays in the relatively mid-paced range. If the last song wasn't any indication, then this song should clue you in. Since The Apocalyptic Triumphator, the band has procured a new drummer, a Finnish man named Tuukka Franck (pseudonym: Goat Aggressor) who's been in a bunch of bands I've never heard of. His drumming style is different from Sinisterror, definitely, and it might rub some people the wrong way because of the somewhat slower direction the band goes in on this EP. Granted, they don't deviate THAT much from the speed of their previous material, but it's noticeable if you've been following Archgoat for a while. I haven't listened to Triumphator for a little while, but I think most of the album consisted of mostly fast paced stuff. There weren't many moments for listeners to catch their breath. On here, there are moments of brevity that let you bask in the truly macabre, murky, sepulchral mist a lot more. There's a really face-ripping solo midway through that Ritual Butcherer delivers that is just fantastic. The keyboards are pretty much absent except in the beginning minute before Angelslayer bellows at the top of his lungs about the eternal damnation of Christ. There's no letting up as the song churns along with glorious fills, rolls, transitions, riffs, vocals -- everything is wonderfully, delectably evil.

The only reason I'm ducking a few points from the near 100% it could've gotten is the intro to the title track is a little bit long, but that's a minor quibble. Also, it could have at least one more song in it to make it a touch longer. Eleven minutes is too short a clock for these Finnish bastards. Everything else is great from start to finish, though.