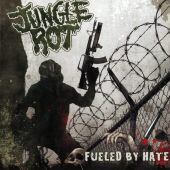 Jungle Rot is a very interesting Death Metal band from Wisconsin. This band has caught my attention some time ago and I consider them as really solid crew playing really catchy Death Metal.

Most riffs are something between Six Feet Under and Scandinavian Death Metal bands like Entombed, Dismember and Grave with vocals reminding Unleashed's Johnny Hedlund. But not only vocals, you can hear some of the Unleashed in 'Fractured' for example. So basically what comes to mind that there are not that many American Death Metal bands which would play it the Scandinavian way. And this band has made a decent attempt and definitely successful.

Guitars are slightly more polished, but still sound heavy and all riffs are really groovy. What is really interesting that when I was reading the band's description on the promo CD I found line which really made me laugh - "style similar to acts such as Slayer and Sodom, rather than the typical Cannibal Corpse and Suffocation rip-offs". Well, there's no Slayer or Sodom here, that's for sure. Whoever was writing this, hasn't listened to much metal in her/his life. Interesting example how your own recording company can confuse listeners by not very accurately presenting your style. Anyways, it's a very good production, with very interesting, low, strong growling and one of a must-have positions in my opinion. My favourite track is probably the last one - 'More Demon Souls', which style reminds me of my favourite last tracks on Edge Of Sanity albums, like 'Feedin' The Charlatan' or 'Song Of Sirens' which is more chaotic and in American Death Metal style. Overall the album is a really brilliant release and great for moshing live.

With anti-war sentiment at an all time high, the timing could not have been more perfect for a new Jungle Rot album. Armed with the most monotonous and hideously boring death metal ever conceived, this band is ready take aim at whoever dares to listen.

Fueled By Hate is as old school and primitive as you can get. Some death metal purists eat and sleep this stuff, but for the rest of us, the utter lack of even the smallest hint of ingenuity will be sure to send you straight into a coma. The band is obviously proud of their stagnant style and the loyal fans that follow it. If you are expecting to hear even one blast beat or solo, then you will be severely let down. They do however have a lead that lasts about three seconds in the closing track.

Jungle Rot isn’t about to sell out to the latest trends of speed and technicality, so if that is your bag then I suggest you look elsewhere. I could try to write more about Fueled By Hate but unfortunately nothing really happens on this album anyway. It is merely just another mid-paced, straight-forward death metal record that will ultimately be forgotten if it was ever discovered and enjoyed in the first place.