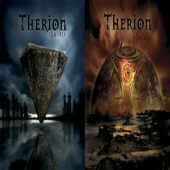 Therion are known for atmospheric innovation. One would assume their new album would dazzle listeners with inventive compositions, orchestrated interludes and harmonized choral arrangements, right?

My first reaction to this disc was, "What just happened here? I put in Therion, but I'm hearing 1995 Iced Earth. This is track three from Burnt Offerings." The structures, riffs and distortion are identical. Christofer Johnsson sounds just like Iced Earth's then-singer, Matthew Barlow. Therion's only distinguishing feature was a choir that appeared one minute into the song.

This is not what you'd expect from the band. It's progressive/power metal with some gothic and orchestral influences. Apparently, Therion spent the last three years listening to Iced Earth, Savatage, Helloween and Anacrusis. In fact, some parts even sound like old Rhapsody songs with testosterone.

The orchestral accompaniment is minimal and mixed so far into the background it sounds like a keyboard. The sound is more an appropriate sequel to Lepaca Kliffoth, rather than the ethereal goth-metal we heard on Secret of the Runes. However, parts of the record show remarkable improvement because Therion rediscovered how to play guitar. Then again, other parts sound like concepts rejected by renaissance fairs. Herein lies this album's greatest defect – double-album or not, both CDs are poorly arranged and definitely not cohesive. On Lemuria, the worse of the two, skipping forward a track is like switching to another band. However, the first five songs on Sirius-B are marvelous power/progressive tracks. "Uthark Runa," "An Arrow from the Sun," and "Typhon" are standout songs. In fact, the death metal elements on "Typhon" are almost enough to please those fans that continuously pester Therion to make another death metal record. Sadly, it's only one song!

On the other hand, some songs really suck. The worst tracks are clearly on Lemuria. It might as well be a B-side collection. "Feuer Overture" is stale German synthpop warmed over and "Kali Yuga Part 2" literally sounds like it was recorded underwater. I have no eloquent descriptor for songs that give me diarrhea. These are all atmospheric, acoustic ballads showcasing Christofer Johnsson's "profound" vocal skills.

What vocal skills? He sounds like he's singing through his nose! Whitesnake could have written these songs about their girlfriends, and that sound should have died in 1981.

Naturally, such a diverse collection of songs makes it difficult to rate this album, so I arbitrarily adopt the following system: Therion win no points for originality, as most of the concepts here were developed by earlier bands. On the other hand, Therion deserve praise for impeccable musicianship. Overall, they lose points for lacking coherency, which is this double-CD's greatest flaw.