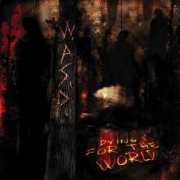 This week a prominent person passed away in the British Royal Family and now we must all be sad, if the yellow press is to be believed. Well, "dying for the world" will probably not have been his intention and if it was, he did it relatively late after 99 years. The eponymous record by solo entertainer B. Lawless - what a glorious transition - is naturally not a member of the Royals, but even if it consisted of releases by WASP, Dying For The World would at best get the role of Diana's riding instructor. But wait, that might not have been such a bad role.

All in all, however, Blackie's full-length fortunately has little royalty to it anyway. The production is quite crisp. It may not have anything aggressive, but it certainly carries a rebellious element. Of course, Blackie rebels against absolutely nothing in real life, apart from allegedly too low fees. But here it's all about his art – and his music certainly puts you in a good mood. The mastermind and his temporary companions deliver two small highlights with the well-constructed opener and the driving 'My Wicked Heart' at the beginning. Naturally, someone could have told Blackie that the "ohoho" parts in 'My Wicked Heart' actually belong to "Chainsaw Charlie", but what the hell. That doesn't diminish the value of this peppy number and the similarly crafted 'Hell For Eternity' also blows the auditory canal free. Not enough with this; 'Revengeance' can almost be described as unbridled. Indeed, the album has powerful moments. Of course, there is also schmaltz on Dying For The World, but many songs present themselves pleasantly rocky without any kitsch.

The ten tracks were released nine months after 9/11 and that may explain the album title and the pathetic lyrics in the booklet. Still, I would have been grateful if Blackie hadn't made his trauma quite so broad here. His patriotism leads him to interesting views ("it's been said that New York is the Capitol of the World" - I don't know anyone in Europe who says such nonsense, but surely all Africans and Asians believe that...), but they have little to do with reality. So you're more happy about a strong headbanger like 'Stone Cold Killer', whose chorus perfectly combines catchiness and aggressiveness. 'Rubber Man' also doesn't mince words when it comes to heaviness, and all in all, this results in a remarkable musical hit rate.

So apart from the sticky ballads and Blackie's ramblings, there's no reason to be angry about Dying For The World. Of course, especially the second version of 'Hallowed Ground' is a waste of time. Nevertheless, all things considered, we are left with a relatively unadjusted, gnarly disc. It avoids undue experimentation, relies on the well-known strengths of the outfit and actually gives the listener pretty much what he probably wants to hear when he buys a WASP CD. Therefore I have no convincing explanation why it leads a shadowy existence in the catalogue of Blackie’s sonic circus. Probably no one even at Buckingham Palace can answer that for me.