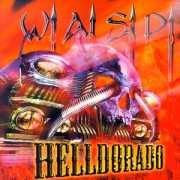 Four of eight pages of the booklet are used for advertisement? This must be a W.A.S.P. disc. Right, welcome to Helldorado. Of course, a fantastic work! However, Blackie would not be Blackie if he would not explain us why. “This album is a return to where we originally started. The object was not to sound like the first album…” (naturally not, this is what primitive run-of-the-mill formations do) “but more like our original demo tapes, which were even more raw sounding.” Even more raw sounding! Yes, Blackie, your music is so motherf**king goddamn raw, we have never heard a rawer sound. Nevertheless, all the euphemisms of Mr. Lawless aside, Helldorado is just old wine in new bottles. But okay, perhaps B. L. was just not in the mood to write another overly emotive album or another – vulgar and therefore also mother**king goddamn heavy – K.F.D. (which was released via – attention! – Raw Power). And, to be honest, his first albums were not that bad. Helldorado also does not disappoint.

Needless to mention, there are some embarrassing moments, because Blackie is Blackie, if you know what I mean; a man who lets the sparks fly between his legs on stage and probably he does the same when he is sitting at home in his weighty wing chair while enjoying the shimmering light of the fireplace. Tough boy! Either way, the spoken intro to “Dirty Balls” does not really convey pedagogically valuable lessons and the same goes for the song itself. But okay, this is metal, isn’t it? I’m undecided. However, the song has a good drive, a simple rocker with an instinctive chorus. Further titles such as “Saturday Night Cockfight” or “Don’t Cry (Just Suck)” also show the humorous side of Blackie’s nature, I have no other explanation for this kind of naming. But does anybody care about this? I don’t. The music itself is surprisingly lively and refreshingly energetic. And honestly speaking, I do not agree with those dudes who say that Blackie was heavily influenced by AC/DC during the creative process that led to Helldorado. Okay, the riff of the title track shows an affinity for the sounds of the Australian legend and the intro of “Damnation Angels” could also be the opening for “Sin City Part II”. So it’s true, some powerful chords seem to show the signature of Malcolm Young (R.I.P.), but all in all, the here presented songs are more or less typical W.A.S.P. tunes.

By the way, this is no surprise for me, because I belong to these (bright) people who say that Blackie writes one and the same song again and again. I am rather surprised that he is able to create so many variations of this song - and they mostly sound pretty good. Okay, “Cocaine Cowboys” was formerly known as “Fistful of Diamonds”, but only nit-pickers take care of such a minor detail. What really counts is that the album is free from these overly melancholic, ultra-thoughtful moments. Maybe it is pretty foolish to re-generate the spirit of times gone by, but I admit that Helldorado can brag with a certain amount of juvenile insubordination. (On a side note, this is almost an ironic twist of fate, because all songs show the conventional verse-chorus-verse pattern.) Only one thing is missing which is usually an integral component of each and every W.A.S.P. output: the fillers. Did Blackie forget them? I feel a tinge of frustration, but all songs have charm and can rely on solid riffs, lines and leads. Moreover, they profit from a pretty noisy yet professional production. This sound fundament gives them a straight-in-your-face attitude and this was probably exactly what the grandmaster of sparkling balls wanted. Speaking of him, his vocal performance reflects joy, rebellion and vigor. Therefore, I cannot identify any weak spots here, if we neglect the childish outlaw-lyrics. Lawless sings “I’m gonna f**k or fight” and he can do whatever he wants to do, but I do something else. I finish this review right now.