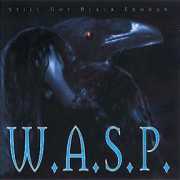 Once I saw a guy in a shirt with the imprint "I wear black until they invent something darker" and another one in a pink shirt that told us "Black was sold out". Guess that the title Still Not Black Enough lies somewhere in between these two findings and the terrible, absolutely unacceptable ballad "Keep Holding On" is its pink shirt. Lawless wants to cuddle with the audience, but I hate it. No musical substance, no inspiring idea, just pure unadulterated kitsch of an artist who rides a dead horse. Things don't get better as the first tones of "Breathe" set in. This number has a bit more in common with my understanding of rock or metal music, nevertheless, it gives me nothing and is just a waste of time. The egomaniacal liner notes explain that Blackie writes best when he is angry about something. and out of this experience comes Still Not Black Enough. If this is true, I don't want to hear any song which has been created while Lawless was newly in love.

The remaining material, we can heave a sigh of relief, does not make us feel to listen to a soundtrack of a party in the old people's home. Blackie moves within his clearly defined limits. He presents solid, minimally boring riffs, mostly a good flow, a powerful yet harmless production and delivers a good vocal performance. The black shirt of the album wears the fitting name "Black Forever" and offers an iota of metallic harshness. However, there are not many songs that put a smile on my face. "Scared to Death" wants to be very dramatic with its explosive moments and the female background vocals and I admit that the song does not suffer from major flaws. Nevertheless, if this track would be a type of ice cream, it would be too sweet. Blackie wants to express his emotions with a mallet and, aggravating this situation, he misses the right moment to stop hammering. Thus, more or less aggressive songs like "Goodbye America" must save the album and they do it, but naturally only up to a certain point.

Finally, it will always remain an enigma to me why such a self-confident one-man-show always puts a cover version on the second position of his albums. "Somebody to Love" does not set an impulse, neither positive nor negative. And seen in its entirety, the same goes for the complete material. Still Not Black Enough, I understand this very well, was not created in order to make black thrash metal fans like me happy. Perhaps convinced supporters of W.A.S.P. will identify much more enjoyable aspects here. Either way, even if you do not put the focus on the style of the formation, you can appreciate some of their full-lengths very much, but the lukewarm output from the beginning of our century does not belong to these works. Only recommended for people who think they must have each and every album of Blackie (and a pink shirt).