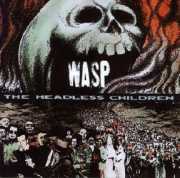 Prologue:
I have an urgent question before I am able to start this review: is there anybody out there taking W.A.S.P. seriously? Don't think so. This party-clown Blackie L. was always somehow a ridiculous jester, just think of his embarrassing costumes on stage. But with the release of The Headless Children, he took the bun: the jester transformed into a kind of a herald of the apocalypse. Beware, my friends, get out of the party cellar directly into Armageddon. What else? This route is only logical and, to close the cycle, I really don't wonder that Mr. Lawless has become a born-again Christian who hates his own former songs. But okay, that's his personal decision.

Review:
So now let's start the review and even though Blackie is definitely and without any doubts a clown, he proved evidence that his band can perform really great songs, at the latest with The Headless Children. Two songs stand out, developing an enormous charisma and power, and it comes as no surprise that they constitute opener and title track. The ominous beginning of the first song and its Hells Bells-like guitars form a stage-setting intro and "The Heretic (The Lost Child)" grows slowly but steadily. Indeed, nobody knows why, but W.A.S.P. have added a dark color to their tried and tested sound and a wasteland atmosphere takes place. It's a matter of course that the formation does not create a thrash, death or black metal inferno. Nonetheless, the song emanates destructive vibrations, both the instrumental parts and the sections with vocals. Hell opens up and Lawless shows, to my surprise, that he is able to master the dark arts. The title track goes in the same direction. The final day has begun, a stomping intro with a roaring riff leads into a simple yet glorious headbanger. Keyboards show up, but they are used very skillfully, and old Blackie makes clear that he is really a fantastic singer as long as he does not f'**k like a beast, but that's probably another story.

What about the further material? Does it stand in the shadow of these two giants? No way. W.A.S.P. deliver a great variety of metallic food and even the more or less mandatory ballad works. Of course, "Forever Free" must be described with attributes such as cheesy, stereotyped and overly commercial. And don't make the mistake to watch the gruesome video on YouTube. I promise it will burn your retina. Not to mention the "uhuuuhuuu" whining at the end of the song. Absolutely unbearable - but totally contagious at the same time. So, who is the bigger jester, Blackie or me? Nobody knows. We just know the biggest jester. Donald's place is safe.

Either way, let's have a look at the opposite end of the scale. "The Neutron Bomber" embodies the metallic poltergeist of the album. It does not really sound heavy, it rather sounds like a Blackie who wants to be heavy, but due to whatever reason, it convinces with its simplicity and the irresistible chorus. It's nothing new that W.A.S.P. always had a talent for sustainable choruses and this song about the mad Donnie, sorry, Ronnie, is no exception in this respect. Better still, the entire output is immune against flops, although I will never understand why a band puts a cover version on the second position of the track list. This arrangement always looks like a declaration of creative bankruptcy to me. Nevertheless, songs like the cover version or "Maneater" are decent and the closer makes fun, despite or exactly because of its ridiculous lyrics. Finally, the production hits the mark, but this should be a matter of course when it comes to releases of bands with such a status.

Epilogue:
It did not take long after this really great album and Blackie took on the next entirely new identity. The preacher of dark scenarios mutated into this crude idol that suffered from an incurable overdose of melancholy. Blackie seems to love clichés, no matter how stale they taste. His artistic way of proceeding really sucks. Honestly speaking, I still think he is just a clown. But strangely enough, I admit that even the album about this idol was not bad, to say the least.