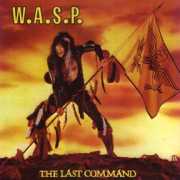 Approximately a million years ago, I was still young and even the band leader of W.A.S.P. - I have decided to avoid his ridiculous pseudonym in this review - was in an almost juvenile state. However, the difference between him and me is explained quickly. He recorded a pretty solid album called The Last Command while I was totally unproductive and just hanging around. So, let's speak about his actions.

Following hot on the heels of the successful debut, the record company seemed to think that there was not much time to capitalize the music of W.A.S.P. On the one hand, this was comprehensible, because the ten songs of the here reviewed work offered nothing that had not been offered a thousand times before. But since the Big Bang from which our earth emerged fifteen billion years ago, the interface of hard rock and heavy metal has never been the breeding ground for musical pioneers. Other qualities are required, for example a snotty attitude, a certain nonchalance and, of course, a sufficient musical substance. Back in 1985, W.A.S.P. met all criteria with their I-don't-give-a-you-know-what-I-want-to-say attitude. Hard to believe, but The Last Command does not blatantly suffer from an overdose of stereotypes, even though each and every song title is soaked with clichés. "Cries in the Night", "Running Wild in the Streets", "Sex Drive... come on, already this selection shows that the line-up did not consist of highly talented men of letters.

However, the record reflects the band's joy of playing and spreads authentic vibrations. Better still, even a pretty calm track like "Widowmaker" does not fall victim to commercial ballad patterns. It creates a fairly dark mood and surprises with a certain individuality. More or less the same goes for "Cries in the Night", another song with a very melodic touch, but without the schmaltz that the-man-with-the-name-I-do-not-write-this-time loved to integrate on later works. Moreover, the comparatively aggressive "Ballcrusher" also leaves its footprint. The memorable chorus makes it easy to keep this track in mind. Is it an original number? No. Is it a good number? Yes, because it sounds lively, clearly defined and successfully reduced to the essentials. I don't think that real classics celebrate their get together on The Last Command, but it is an album that still makes fun from time to time. Needless to say, that I am speaking of a pretty dirty fun, but the more or less impulsive riffing of tracks such as "Fistful of Diamonds" are not interested in a sterile atmosphere and that's a good thing. Spontaneity, a feature that W.A.S.P. totally lost after their first three albums, plays a good role and conveys a kind of outlaw feeling.

The album sounds like a W.A.S.P. album should sound, and I really do not know anything else to write about the production. Instead, let's finish this review with some words about the opener and maybe most prominent number of this output. "Wild Child" is based upon solid verses and a catchy chorus, but its lyrics win every award for vapid banality. "I'm a wild child, come and love me, I want youououou" - hard to endure. Furthermore, the instrumental part of the number sounds pretty uncoordinated. I guess the band leader with the funny pseudonym stumbled through the recording studio, fell over some rattles, tambourines and keyboards and an obviously drunken sound engineer decided to release this mishmash of cheap effects. At the end, it doesn't matter. The album is what it wants to be, a solid package of vigorous hard rock / heavy metal and it holds some really fine guitar lines, for example in the title track. And I want to be young again.