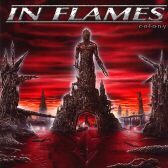 The high-energy metal propulsion engine that In Flames has become is cranking out one phenomenal work after another. With countless outstanding qualities shining through, it becomes far too difficult to get to them all without drowning the reader in words.

Album after album, you can hear the production getting more and more intense (and perhaps better funded) with these melodic-death deities. Another thing you will notice is how incredibly tight this band is getting. The weaving guitar-work of Jesper Strömblad and Björn Gelotte is just getting slicker with each passing moment. This band is tight!

The arrangements are fantastic and are writing the blueprints for copycat bands that are sure to come in the wake of this bloody outstanding sound. Coerced Coexistence may be a prime example of this archetype.

But it’s not just the wickedly tight drumming and magnificent guitars that are bringing this band to sit at the roundtable of such fantastic acts as Iron Maiden, frontman Anders Fridén delivers with deft control a monster performance that is hard to match.

The amazing thing about In Flames that is so well exhibited in this album is how they can display absolute viciousness with such wildly moving and downright victorious melodies.

Bottom Line: This band is injecting an unparalleled solution of blistering metal and melody, this album will set you full speed ahead.

Every good band must evolve and change its sound to avoid becoming stale and predictable, and on "Colony", the path In Flames would eventually take becomes clear. A lighter, more melodic type of death-black metal sound that is being hailed by some as the "greatest thing to happen to metal since Maiden" is what they deliver with "Colony". While I don’t share such an appreciation, I still can’t resist the simple charms of this album.

At first they seemed like a second rate Children Of Bodom, but I eventually realized that these guys have a unique sound of their own. Anders Stromblad and Blorn Gelotte shower us with neat melodies and skillful fretwork behind Anders Friden’s vicious vocal assault. I have to admit that of all the death metal singers, this guy probably has the most likeable vocals; he just seems to put more feeling into his singing and doesn’t stick with one sound.

The guys usually use the same method to write their songs. "Resin" is the perfect example and shows the typical "Colony" song buildup. Starts off with some really good melody, goes for the verse, chorus, verse and a few more attachments before it explodes right back into the melody again. From that point progressing to the solo or further melodies. And the simple formula works very nicely for all songs, although there are one too many filler songs on here like "Scorn" and "Zombie Inc." that bring "Colony" down as a whole.

Painted by the renowned artist for metal albums, Andreas Marshall, the cover for "Colony" is remarkable, although, like the lyrics, I still don’t understand what the hell it’s about. Most of the lyric lines on the album deal with some kind of science fiction storylines, near as I can figure, which just further separates these Swedes from their black metal counterparts who constantly seem obsessed with the "medieval" theme.

Bottom Line: Perhaps the best of the new melodic death genre, In Flames seem to be the leaders of this Swedish movement, which seems to have gained followers like Amon Amarth and many others. "Colony" is good, but there is too much filler material here to make it great.