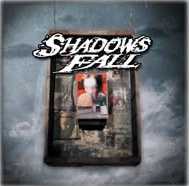 Type: Full-Length
Release Date: 2004
Label: Century Media Records
Genre: Classic, Hardcore, Thrash
1 The Light That Blinds
2 Enlightened By The Cold
3 Act of Contrition
4 What Drives The Weak
5 Stillness
6 Inspiration On Demand
7 The Power Of I And I
8 Ghosts Of Past Failure
9 Eternity Is Within
10 Those Who Cannot Speak

Change is always a good thing, when the band strives for their own voice in the world. Many fail and disappear from the musical landscape after basically shooting themselves in the foot. Few do end up making it, then there are only that rare couple that seem to be the masters of their own domains. Springfield, Massachusetts based Shadows Fall is one of those few bands that have changed and evolved, yet still kept their fan base in tact. A feat in itself.

They were a Death Metal force at first, but they have take the right path to where their music needed to go. People say there are now a speedier Metalcore or a bastardized form of Nu-Metal sort of flavouring. That is shit calling Shadows Fall any of this. I call what they do is a sort of Death-Thrash mix with some shading of even some old school mixed in for favouring - combined all together for maximum metal output.

Songs like the explosive ‘Stillness’ to the all encompassing brute force assault of ‘Those Who Cannot Speak’ show that the band has the complete trifecta necessary for a good band. Pure talent, overwhelming power and the total balls to do it in their own way and the fuck with anyone. With that, they truly are metallic superstars, and "The War Within" shows that point rather well.

You either like Shadows Fall or you do not. You cannot ignore the fact that they are one of the best in the business today. Any one of their releases can be considered to be impressive and this album really hits that point home. Watch out Metallica, Slayer and every other band out there right now - The Big Guns are in town, and will take you all down with ease. Good stuff!

Shadows Fall has re-written the book on American metal, penning chapters on riffage, solos, drumwork and singing. The War Within is, simply put, one of the best damn records to come out in years.

The War Within fuses metal together with hardcore undertones, the bands distinctive sound, like riding a rollercoaster upside down at breakneck speed without wearing any safety equipment. Not just a blatant scream-fest either, Brian Fair’s voice helps carry this album further; rough enough to complement the music, and not overbearing to distract the listener. Shadows Fall has no reservations about incorporating solos into the fray, proving it’s still cool to have flying fretboard fingers in the 21st century.

Some bands, no matter how powerful their live performance, fall short on their records. Instead of capturing their live essence and energy, they produce only a satisfactory level of artifical “studio” sound that generally results in their CD’s getting more use as a coaster for your beer than anything else. The War Within does not succumb to any such notion, romping and stomping through ten tracks that are more infectious than stepping on a rusty nail. It should be no surprise that Shadows Fall have also once again utilized Zeuss (Hatebreed, Blood Has Been Shed, Sworn Enemy) as their producer.

It’s pointless to single out any particular track and sing it praise, pressing any track number on your stereo is hitting a bulls-eye.

Shadows Fall are song architects, each member of the band understands the art of conveying emotion through music. They are not afraid to focus on a soft melody or groove while tying it together with six-string crunch.

The War Within is The Art of Balance, Of One Blood and more. Just as Master of Puppets is to Metallica, Peace Sells…is to Megadeth and The Number of the Beast is to Iron Maiden, this record will forever become synonymous with the name Shadows Fall.