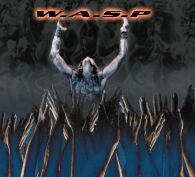 The concept album is a tricky one to pull off, weaving a story through one song after another. For example, after initially leaving Mercyful Fate in the 1980’s, King Diamond made a career from it. Some were gems, (Abigail) and others, turds (The Graveyard).

WASP has certainly endured their share of highs and lows, as well. Twenty-plus years later, fans still cry out for “I Wanna Be Somebody” and down shots to “Blind in Texas.” In 1999, delusional critics hailed the passé Helldorado as the comeback-of-comebacks, but not even Chris Holmes could save that record.

The ambition behind the Neon God concept alone deserves the highest praise, trying to understand how WASP split it into two successful records may cause stifling of the brain. Blackie sings with true spirit and power, undoubtedly tapping those same inner strengths and demons used when putting his lyrics to paper. It’s more than a “storytime” record, it’s another look inward for Blackie; based around themes of blind religious worship, deceit, love, rejection and betrayal.

The Neon God keeps your attention through and through. But, for those who simply want to know if the record rocks – it does. For example, track eight, “Destinies to Come,” kicks off with a ripping guitar line that burns an imprint on your ears, and “Come Back to Black” is so annoyingly catchy it bounces it’s rhythms around your head for days on end.

However, it’s not the sort of record you jam out, thrashing your hair around in circles, making your head spin. While that may be The Neon God’s only downfall, Blackie wants to make you think – and that’s not bad for a guy who affixed buzzsaws to his crotch.