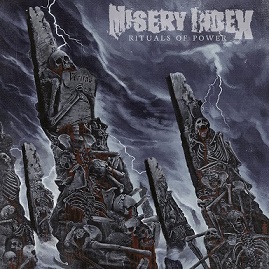 There is a furious approach to Misery Index’s newest release that is welcome to behold.  Now the band has gone away from its grind roots into a more death metal sound that makes sense for them and they have gotten comfortable using it.  This is the issue I have with Rituals of Power.  When this sound was newer to the band their full-length The Killing Gods, they were much more interesting and stuck out a lot.

They now sound a lot more like a death metal band like Hour of Penance and though they bring strong riffs, the music they create is starting to sound a bit repetitive.  It is still full of power and panache, however.  The music here has an urgency and drive that it culls from grind to become all the more powerful and effective.  The band have tightened things up, but they simply don’t sound as original as they did on their last full-length.  This leads to some level of enjoyment, but a bar that has been set by the band themselves that prevents them from being even more exciting.  It is furious music that lacks the complexity to be truly interesting.  The band has dug themselves into a bit of a hole with their sound and it’s unfortunate because The Killing Gods was one of my favourite releases of the year 2014.

There isn’t anything inherentely wrong with the album, it’s just that it doesn’t have the impact of its predecessor anymore.  If this was my first exposure to the band, I think I would be a lot more excited with the music presented here.  As it stands, this is a strong death metal relese with a bit of a grind flavour that excites at times and at others is a bit more generic.  It’s still a fairly strong effort overall.