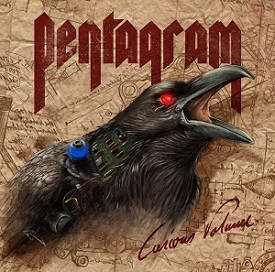 American doom band Pentagram has done more for metal and heavy rock music than most would give them credit for, largely by virtue of just how long they've been a band, in one form or another. And while they've certainly had a great deal of hiccups along the way, whether that be uncertainty about which moniker to go by, Victor Griffin coming and going, or Bobby Liebling struggling with addiction, it's clear that this is a band that takes what they do seriously, if nothing else. So while 2015's Curious Volume was being touted as something of a return to form for the band, I didn't see it that way, especially since I had no qualms with liking the previous Last Rites. Both albums were simply Pentagram reacquainting with Victor Griffin and came right on time, when you consider the 7 year gap between Day Of Reckoning and Be Forewarned that had defined the band's past. Really though, Curious Volume was simultaneously the album that all of traditional doom and heavy metal needed around this time period, along with "Sacred" by The Obsessed, and that's not because those are really unique or groundbreaking records for the most part.

Nope, Pentagram is totally just a band that formed in the 70's sounding like a band that formed in the 70's, and I love that. First of all, say what you will about the band reusing decades-old material like 'Earth Flight' (a far more upbeat anthem than the gloomy 'Change Of Heart' which it shares lyrics with) for their longplayer, but that's part of what makes every Pentagram album solid, is that you can pick any one of them up and know you're getting Pentagram. And besides, plenty of people who listen to Day Of Reckoning for the first time have no idea that 'When The Screams Come' was written way before 'Burning Savior', because those songs totally fit together and the same stylistic consistency can be heard on the newest album.

That's not to say there's nothing setting volume apart in the band's catalog though, because in fact I think it sees Victor Griffin exploring a new side of his guitar playing, which on the doomier tracks like 'Dead Bury Dead', the title track, and 'Close The Casket' I can describe as having some subtler shades of despair to them than classics like 'Evil Seed', which simply goes from being thunderously heavy during the intro to depressingly melancholic during the verse. I think on this album though, Griffin makes use of some softer picking techniques and more refined chord progressions, which meshes well with the now aged voice of Bobby Liebling, 'Devil's Playground' being the prime example. Along those same lines, I also notice that the music overall here is a bit "groovier" doom than what Pentagram has typically been known for. Sure, there's, as expected, tracks like 'Lay Down And Die' and 'Misunderstood' which are the absolute definition of upbeat doom congruent with songs like "Leaving Town" by Iron Man, but morever there's oddball songs like 'Sufferin'' which have a bizarre swing to them, the type of thing where I can't tell whether it's a modernization of traditional doom or a technique that actually predates Born Too Late, if that makes any sense.

One complaint I have got for this otherwise splendid blast from the past would be the lack of bass in the production. Oh sure, it's probably actually louder than the bass in most other modern traditional doom and heavy metal albums, but it's still not loud enough, because I want Review Your Choices-level beefiness, it'd suit the music here a lot, I think. Plus, Victor Griffin's nephew Greg seems to be the type of bassist who totally gets what traditional doom is all about, and you can believe it because he was in Place Of Skulls, too.

Overall though, Curious Volume represents Pentagram still being Pentagram all these years later and for that reason it's the album that old school doom needed circa 2015, especially since that's when doom-lite like Khemmis was getting big. If you're just getting into doom, honestly you could do a lot worse than to give Curious Volume a listen. It's not as good as the first four albums but it is still True American Doom Metal.