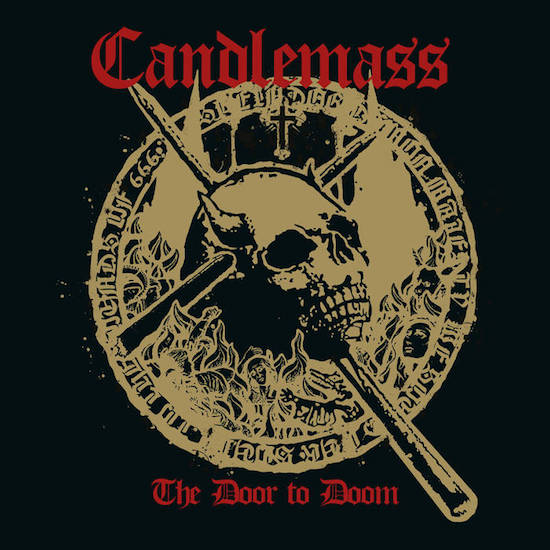 Where do you think you are when you step through The Door to Doom? Probably in the House of Doom. Exciting? No, somehow logical, predictable and a little bit boring... And so it goes on. Who lives in the House of Doom? Surprise, Leif Edling. He has made himself comfortable and is reluctant to leave his fluffy couch. There he sits now and writes his riff-emphasised melodies, which still sound pretty much the same as they did 35 years ago, when Candlemass released their debut in 1986. Actually, they even sound something like the style-forming harmonies that were presented by Mr. Iommi on 13.02.1970. But the other 16 years don't matter now either.

You might have noticed it when you read the first paragraph. The Door to Doom is not an album that sends me into absolute euphoria. Candlemass offer more of the same. They do it in a mature, dignified and anything but bad way, yet Edling could have at least thought for a moment about some kind of exceptional characteristics. Or (totally revolutionary) just let someone else write a song. Some of the melodies sound damn familiar, but that's probably his personal touch. Speaking of personal touches, the new singer called Johan Längquist doesn't add any. He has a very similar approach to Robert Lowe, so he is not a bad vocal acrobat, but he hits the notes safely, powerfully and clearly. He even creates a certain drama and tension, but sorry, we know all that already. I would have rather wished for Messiah or Thomas Vikström back.

Of course, of course, I can reassure you all, dear readers of this review The Door to Doom is not a dunghill. This is not only due to the full, albeit somewhat polished sound of the album. There are no total failures on the song list. Even the soft 'Bridge of the Blind' is not an annoyance. Thanks to the usual but fortunately not rancid mixture of intensity and indulgence, the material gets into the ear well, but often out again quickly. 'Under the Ocean' and other tracks have really some strong sequences to offer, but a real highlight is missing. There is no new 'Dark Reflections', 'Assassin of the Light' or 'Of Stars and Smoke' (and even if you have other favourite songs, their class is also touched upon here at best). Maybe the story of Candlemass has simply been told. What remains is a nice, unspectacular, foreseeable and somewhat poppy doom record, without which the world would not be significantly poorer.

What do I see? Colleague Edling is enraged. He makes an effort to get up from the couch and vigorously object. In a moment he will have risen... but no, too strenuous. He prefers to stay in the comfort zone. The couch is just too warm and cozy.

Candlemass has brought the doom flavour to their new album The Door to Doom.  It has crushing riffs and a dreary feeling that is appropriate for the genre.  There are some similarities to older Candlemass albums to be found here and they resonate in the classic style of the album.  However, the band does get interesting and throws in some jarring acoustic passages to the mix and other elements to make sure that the more modern feel of the album is kept.

Right from the onset, the doomy style of the album is foreseen and this is one that is morose, yet charged with the most crunchy riffs available.  I came across thinking this was a solid doom metal album with the proper atmosphere, but it still isn’t perfect.  There have been better doom albums done in the past and some of the songs sound overly familiar.  One only has to look at the past of Candlemass and their first three albums to find superior doom to this.  Since this is a genre that has lots of entries to it, the album seems to come up a bit short to being the perfect doom album.  Thankfully the band saves some of its best material for the end of the album.  The song The Omega Circle is undeniably one of the most exciting ones here and features a variation in the guitar types used to make it more exciting.  Beyond this there are several solid doom moments, but none that stick out and really catch your attention.

This leads to an album that is very fun, but doesn’t have the ability to take it to the next level.  I found last year’s album from The Skull, The Endless Road Turns Dark, more interesting in this genre than this album.  Still it has enough drive to make for a relatively strong listening experience.