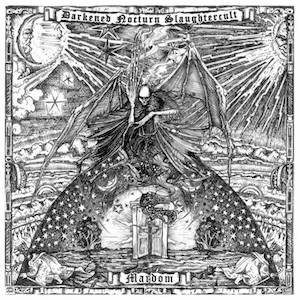 Once again, we are greeted by the unholy presence of Darkened Nocturn Slaughtercult, a band that has yet to release anything sub-par and it remains the same on Mardom. The wait has been long, since Necrovision, which was highly praised amongst supporters of the band, and since then much speculation has been growing with regards to their follow up release. Darkened Nocturn Slaughtercult has been on the high anticipation list of many supporters in receiving lots of prying eyes into what their next black march would entail. Immediately, when I hear the name Darkened Nocturn Slaughtercult I think of albums like Hora Nocturna, Nocturnal March and my favorite, Follow the Calls for Battle. Knowing the weight of those records and their importance to the black metal genre, it has come as an expectation that Darkened Nocturn Slaughtercult should release nothing that would diminish their level of excellence as they are forced with every new release to mirror the greatness of the mentioned records even when adjusting their sound and approach. Well here we sit before the band’s latest war-chant, and man have they put out yet another dauntless spell.

By the time you get past the intro “Inception of Atemporal Transition”, and you hear that evil laughter being emitted from the vile war queen Onielar, it's not long before you set foot into the well-known territory or arguably Germany’s most distinguished black metal sect. Horrn (underrated as hell drummer) shakes the battlefield with his blast beats and the addicting echo of his snare drum, he’s returned with the same force as before but with some new tactical equipment and measures. Thus being, his technical effort comes to rise as he plays with more variance than noticeable on other records. Imagine Saldorian Spell but with more technicality. Fear not fret not, you will still get the furious fast paced packing of power you're used to but prepare for some neck twisting moments. The dedicated efforts of long time decorated general Velnias is in full-force on Mardom; he delivers the riffs you would come to expect from a musician of his ranking. Having existed within the domain of Darkened Nocturn Slaughtercult since The Pest Called Humanity (demo); his presence is felt from the very first string picked, it's almost nostalgic to hear the still dependable and victorious chords of his guitar playing once again.

Onielar stands unshakable in her bloody battle-gown, issuing the scripts of destruction, carving a path towards victory with her voice that instills terror and trembling. Yes, that high pitched war-wail we have come to love to form the demoness is undeterred to this day; doing all that and wielding guitar duties, how much strength does this woman possess? Her efforts on every release never seem to take a bystander’s posture, rather commanding every second of the immoderate torrent of terror.

Starting out with the quick, technical and rhythmic self-titled track, “Mardom” immediately organizes a layout of what is to be expected; showcasing diligent teamwork, Darkened Nocturn Slaughtercult give perhaps some of their most diverse workings to date. With instantaneous time signatures being placed all over the recordings, it’s nearly impossible to predict and follow the motion of the waves hitting you on the first listen. On the second spin experiencing the music, you begin to develop an understanding of their approach whilst being subdued by mesmerizing tracks such as “Mardom”, “A Seven Most Devout”, “The Boundless Beast”, “Imperishable Soulless Gown”, hell, every song on Mardom is a highlight, every tune is in combat in the quest for musical supremacy. I’m trying to highlight the best of the bunch but it's so damn difficult to choose because they're all unbeatable in their own special way. From the changing melodies of “T.O.W.D.A.T.H.A.B.T.E”, to the groovy opening and climaxing tempo of “A Beseechment Twofold” and the fast nostalgic punch of “Sphere” that brings to rise memories of The Pest Called Humanity, I mean how many hands does Horrn have, he’s like a giant tarantula spider sitting in the center of 4 huge encircled drum kits, every limb actively engaged in webbing all sorts of new paths for the guitars to lay their golden strings.

Mardom takes bits from previous albums and weaves them into one, whilst applying a significantly more controlled approach by using palatable bridges and breaks to traverse back and forth into technical segments. Onielar’s vocal pitch matched with the consistency of the blazing guitars create a magical effect that deepens the tonality of the music; not excluding the bass effort of Adversarius given his equanimous effort to support the wild barrage of riffs trumpeting throughout the music. At the first listen I was immersed, but with each new session I began to garner more appreciation for the material. Something new always seems to jump out at you with every spin whilst absorbing the musicianship of Darkened Nocturn Slaughtercult. If it's not the sudden machine-gun drumming of the tyrannical tarantula Horrn, or the flexible fingering of Velnias and Onielar plus her vocals, then it's the juggernaut mold of the band’s total sound.

The thrashing, the blast beats, the guitar riffs, the relentless drumming of Horrn and the spellbinding consonance evinced on Mardom accumulates to perhaps the best black metal album of 2019 thus far. Mardom is one for old and new supporters of Darkened Nocturn Slaughtercult. They have crafted something that further strengthens the fortress of their history as a reliable source for monumental black metal.