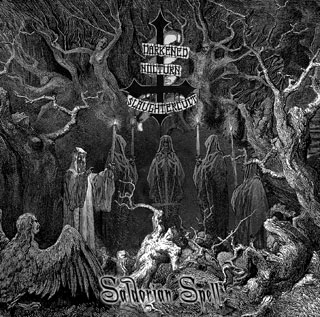 DNS remain true to themselves. Another stylish black and white artwork and still this grim, cold and quite occult kind of black metal that comes from deep within. On the one hand, this is nothing new, on the other hand, this is an approach that guarantees an immediate nightfall. Onielar, the female lead vocalist, still does not sound like a beautiful woman but like the incarnation of misanthropy and the musical vision of the corpse painted horde is driven by hatred and scorn as well. So far, so good.

Nevertheless, Saldorian Spell does not achieve the level of its predecessor. Hora Nocturna had this über-hit "Das All-Eine", while the opening title track of their work from 2009 does not burst with memorable elements. But that's not all. Generally speaking, some riffs and leads of the eight songs suffer from a lack of clear contours. The material is inspired by the aura of albums such as "De Mysteriis Dom Sathanas" (without Attila's singing style), yet it does not reach the perfect level of this monument - by far not. DNS cannot be blamed for being not able to create a proper atmosphere or to transform their spirituality into their compositions. Everything is covered by a cloak of darkness. Nevertheless, I cannot fight against the feeling that the musicians did not fully exploit their potential, even though some songs are really good.

"The Descent to the Last Circle" is opened by a simple drum rhythm which rolls out the carpet for an energetic guitar line. Blast beats intermezzos give the song a dynamic touch and the different parts shape a very coherent piece. "Kataklysmic Bretherens" switches from melancholic yet menacing guitar notes to high-speed parts. Both tracks are pretty similar to each other and unfortunately, this applies for the remaining six tracks as well. It seems as if the artists have set themselves a very strict limit for their musical room for maneuver. That's not a bad thing per se, but here we have a record that has to struggle in view of this voluntary self-restriction. It would be an exaggeration to say that the output borders on monotony, but it also cannot be ignored that DNS have forgotten to integrate some outstanding elements that give the songs their own personality. However, I don't want to complain too much on a high comfort level. Saldorian Spell is still a very robust black metal album that spits on any form of external influences.

The production shows no signs of weakness. Maybe the album sounds marginally dull and the final five percent of vehemence are missing, but this is the typical approach of DNS. Without offering any pretentious nonsense, the band sticks to the well-known formula of the here performed genre and any kind of questions concerning the authenticity of the trio is simply idiotic. From this follows that each and every fan of trve black metal is invited to give the album a try. It won't change her or his life for the better, but when the last tones of the outro with the German lyrics fade away, she or he will have had quite entertaining 41 minutes of music.