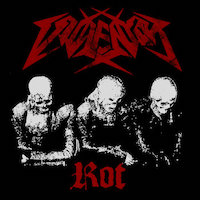 I did not have any big expectations, I simply bought the album. But when I listened to this noisy assault for the first time, it just blew me away. Three Italians in a rather pissy mood raise a proper storm of thrash metal. Apparently energized by the anger of The Exploited, this album could have been the worthy successor of "Fuck the System". It takes no prisoners, but leaves a trace of devastation. And a song title like 'Fuck the World' is really not far away from the lyrical themes of Wattie.

Violentor work with the precision of a clockwork. High-speed leads, staccato drumming and aggressive, throaty vocals characterise their songs. You can call it a voluntary limitation to the essentials. This goes along with the puristic appearing cover and the concise album title. Variety is written in small letters, but it does not do any harm. Quite the contrary, if you like the opener, you will love the whole record. The singer notes in the first chorus "your life is rot", but - to be honest - my existence feels absolutely right as long as I can listen to this album.

By waiving the widely extending guitar solos, Violentor focuses on short solo eruptions and moves skilfully between punk and metal. Some of the riffs you might have heard before. But still it's lots of fun to lend them an ear, because all band members sparkle with the joy of playing. It makes no difference whether you test the opening title cut, 'Fuck the World' with its irresistible leads, the menacing 'The Last Sentence' or any other track. Violentor offer consistently high quality stuff. There isn't any blackout. Perhaps 'Rabid Dog' cannot quite keep up, but this is largely a matter of personal preference.

As far as I know, the self-titled debut sounds more or less the same. Therefore one finds virtually no evolution in Violentor's music. And that is what I really like. Nobody needs progress as an end in itself. Punk-fueled metalheads like these Italian savages are well advised to stay authentic. This is precisely the challenge that the band has to master. As long as they make clear statements like "Violentor would like to thank NO ONE", they are absolutely on the right path.