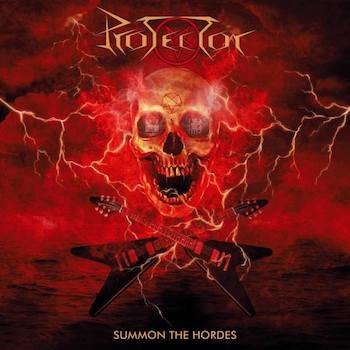 Destruction, Sodom, Kreator – the trinity of German thrash appears almost as a closed society. Some maniacs accept Tankard as the fourth force, but what about Holy Moses and, last but not least, what about Protector? Due to whatever reason, the guys from Wolfsburg (by the way, the city was founded by this lunatic wannabe-wargod from Austria back in 1938) were always underestimated. Or did they integrate too many death metal elements with the effect to be caught between a rock and a hard place? I have no clue, but I know that they are back with their seventh full-length, the third one which has been created by the now mainly Swedish line-up. Just like Venom, Protector is one of those bands whose line-up changed completely during the years, but it is amazing to see that all of their albums rely on a similar approach. Sometimes they emphasize the thrashing elements, sometimes the death metal legends can click their tongues, but these are just nuances that do not cause an incoherent overall picture. Summon the Hordes is a typical bastard of these two extreme forms of metal.

Apart from the totally stupid artwork, the album is free from downsides. The informative booklet holds liner notes to each track, not for the first time in the history of Protector. This shows the close connection of Martin Missy to his followers and it makes the likeable band even more likeable. The charmingly rumbling production also speaks for the band’s flavor. It does not lack directness and pressure, but it also connects the year 2019 with the mid-eighties in a nearly perfect way. Even the playtime of roughly 38 minutes is somehow old school.

Every record needs highlights – the only exception are Sabaton albums, they just need a comfortable bin where they can rot eternally. Protector reach their top form in “Three Legions”. Its highly dynamic and straightforward chorus makes the song to what it is: a thrash metal torpedo with slicing guitars and great lyrics. They deal with the "Battle of the Teutoburger Forest" in the year 9 A.D., but the dudes offer the entire range of topics, from party issues to serious themes. However, there are many good tracks like “Realm of Crime” or “Meaningless Eradication”, but really outstanding songs are hard to find and – nearly shameful - track no. 9 recycles the riff of “Face Fear”. No, this is not just another Protector full-length, this would be too negative. However, the sum of solid tracks does not result in a more than solid album and that’s nothing but a logical consequence.

I cannot suppress the feeling that Protector have a much bigger potential. The ponderous homage to the legendary Swiss co-inventors of death and black metal, to give but one example, remains under its possibilities. The faster pieces recreate the slightly hysterical moment that we know since the first days of the group and that’s okay, but not more. Sometimes it seems that the high speed of the drums prevents that the riffs can develop their full flavor. Anyway, as mentioned above, the album is free from throwaway tracks. This fact keeps the band’s head above water and it’s good to know that they are still alive, but maybe they should be a tad more self-critical when it comes to the next song-writing process. So, this is an album that cannot challenge the back catalogue highlights of the formation, but it gets a minimal upgrade in view of its funny and catchy closer which continues the tradition of “Spacecake” or “Calle Brutal”. And regardless of the quality of this work – there can be no doubt that it has more soul than the last Destruction outputs and more power than the modern works of Mille’s circus.