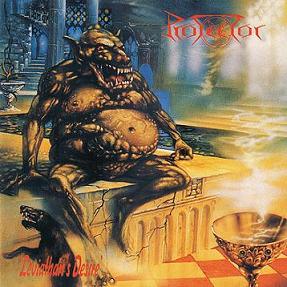 The first wave of thrash metal came to its end at the beginning of the nineties and therefore it was good to experience that some upstanding combos still held the banner high. Protector belonged to these bands. 'Leviathan's Desire' showed no signs of weakness. The band still provided harsh, powerful and aggressive music. Nevertheless, you have to be the greatest thrash fanatic under God's sun if you want to give this vinyl 100% (or more).

Of course, I am speaking of a pretty good output, but there is, for example, the average production which cannot be ignored. Leviathan's Desire does not convince with a full sound. Neither the drums nor the guitars develop their real strengths. Instead of confronting the listener with a wall of sound, the production lacks tightness. This is a pity, because the opener 'Humanized Leviathan' has some aces up its sleeve. A thrilling introduction, high speed parts, hoarse vocals, a whipping chorus and some sinister leads form the track. In other words: Protector just the way we want them. Indeed, this song can be deemed as a typical track of the then German gang. The mix of more or less apocalyptic mid-tempo parts and fiery speed eruptions accompanied them since their very early days,

Given this situation, it comes as no surprise that the band recycles one of their first tracks, namely 'Kain and Abel'. No bad song, but also actually not interesting enough to dream longingly of another version. Moreover, in view of the short playtime of the remaining material, this new version seems to have the function to lengthen the EP. But quality will always beat quantity and so it would have been better to release just the three new examples of sonic malignancy. 'Kain and Abel' stands in the shadow of these newly spawned songs. 'Subordinate' combines sharp riffs with an oppressive aura that matches the hopeless lyrics. The hymnal chorus contrasts with high velocity outbursts, before 'Mortal Passion' delivers this mix of rapid insanity and mid-paced rhythms again. (By the way, all these rather slow sections appear as the soundtrack for a battle-weary army that marches to its final battle.) However, the hectic parts prevail.

All in all, Protector did not give their supporters any reason to cry. Leviathan's Desire sounds better thought-out than Urm the Mad and from today's perspective, it heralded the fantastic 'A Shedding of Skin' in a very appropriate manner. No milestone, but a short appetizer without any rotten ingredients.