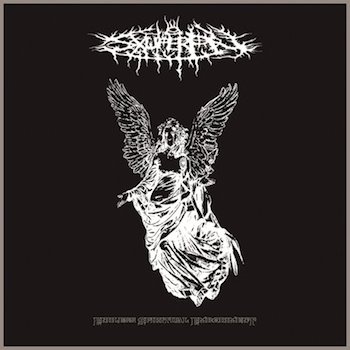 Inner consciousness tugs at the fading fabric of a beaten soul; it's will and spirit slowly diminishing until the last bit of twine withers away to an abysmal depth of dormancy and powerlessness. In this, an echoing cry to reawaken and more importantly repair that which was destroyed whilst in a sleeping state propelled by ignorance and the adopted falsehood of a spiritually broken life-form. The true makeup of existence resurfaces in an attempt to bring understanding and wisdom to the weary capsule carrying the cold mindless principles of fabricated divinities. Against the nature of false doctrines, what is interpreted as lust is applied to a socket in the characteristic tree, survival then takes its rightful place, the mechanics of self-preservation are activated; hence, Eudaimonia becomes a reality. No longer restrained by the wall of lies, the being can now stand free of the insurmountable desert dogmas. The pulse of rectification and amelioration calls out.

Continuing to strike at the center of untrue ideologies, Endless Spiritual Embodiment sees Sxuperion glorify the philosophy of self-ascendancy, the growth of one’s spirit by destroying the pillars of lies. This is a compassionate new step taken in the series; yet the sound is a familiar one, in that it remains within the vein of and can be perceived as a direct descendant of Cosmic Void. The instrumentation here is a bit more on the faster side of things, though temporary intervals of mid-paced riffing and drumming are featured. The melodies are just as enjoyable as on 2016’s effort, just as is Matthew’s drumming; meanwhile his vocals torrent over the lacerating instruments slowly disintegrating all mental barriers. Every song seems like a new phase or progressive state achieved in the quest for Godhead. Upon entering the “Sacred Chamber of the Enlightenment”, the listener is drawn closer to that which will join in communion with one’s self. With each new stride the boulder of mendacity crumbles bit by bit, the foundation of knowledge begins to overflow in-so drowning out the spiritual pestilence. Every step feels as though skin is being shed, such as a snake would from time to time. With each new passage traversed, a new subconscious is unlocked and made active as a progressive reward to carry through as a tool/weapon to aid in the feats of the next phase.

At the “Phallic Point of Periapsis”, a new stage is awoken, the characteristics of a superior entity enters the mind and exterminates the parasite of obstruction. This track is a worthy representation of its title as the instrumentation truly blossoms here in providing an embrace that holds the listener with firm grasp to the bosom of the record’s purpose. Amalgamated with antipathy and congealed with that industrial galvanizing tone, “Phallic Point of Periapsis” embosses the concept of Endless Spiritual Embodiment.

In an interview with Metalbite, it was stated by Matthew that Endless Spiritual Embodiment is a continuation of Cosmic Void. I can agree as Cosmic Void did close with much room left for exploration and given the themes of the music, it's not the kind of thing that ends at-all. This form of music is timeless, it does not aim to achieve only what was intentional but should the opportunity of new treasures being discovered present themselves along the journey, it proceeds to seek out such. Holding on to the concept of invoking beings beyond mankind's understanding still comes to surface when listening to material such as “Sacred Chamber of the Enlightenment” and “Endless Embodiment”. In spite of the music being so aggressive, you're still greeted by an air of mystique, an overlooking force reminding the listener of the lurking dangers of the quest.

Having mentioned the ferocious speed in which the music is being played, there are some times I would have liked to hear a bit more difference in the structure of the compositions to add a thicker layer of depth. As a follow-up to the previous record and one that is connected to also, that feeling is present due to the unforgettable melodies manifested on Endless Spiritual Embodiment. Mathew’s drumming showcases more aggression this time, less down-paced moments exist and more of the boiling rage styled drumming takes control of the record. About the sound of the snare, they are not as loud as I would like them to be. That aspect needs a buff, perhaps in the vein of Valdur’s "Divine Cessation" or the implementation of a different tone as to give the music a bassier vibrancy. I see a greater deal of trance making its way unto Endless Spiritual Embodiment, in so creating a fluid stream that takes the listener through each segment wistfully. In addition to “Supposition Course” perhaps an instrumental similar to the likes of those heard on EON or Garden of Hesperides’ "Hymn of Forest Floor" EP, would have added an extra bit of profundity to Endless Spiritual Embodiment. However, all is still well when contemplating the effect of tracks such as “Negative Interior Intersection”, “Phallic Point of Periapsis” and “Infinite Ethereal Vault”, all of which manage to ensnare and enmesh the quiddity of Sxuperion.

Supporters of Sxuperion's music will be very grateful for this new material, given it has been quite a while since Cosmic Void's release in 2016. Endless Spiritual Embodiment is yet another confident stride towards restoration of the self to the image and qualities as intended by the creators.