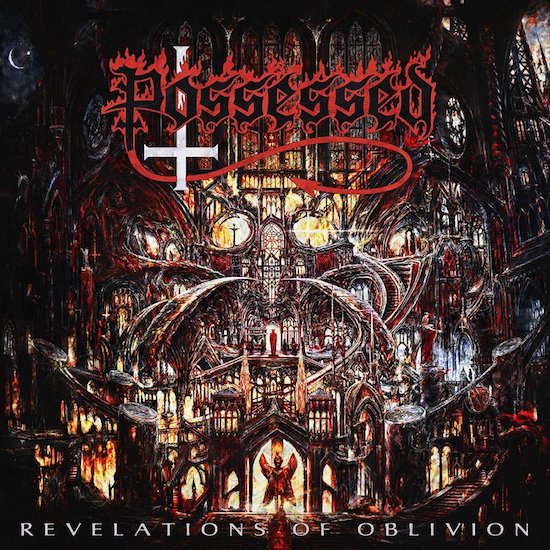 The death metal pioneers release their first album in over 30 years, completely out of nowhere. I don't think anybody was expecting it to be this amazing, but it is very amazing indeed. The singles they put out to tease this album were decent, but they didn't fully capture the whole greatness of the album. When I heard a small snippet of one of the singles I wasn't really all that pleased much, but now that I've heard the album in its entirety, I can say that I'm definitely pleased indeed. Now that I've heard all of the album, the singles they released before the whole album sound amazing!

My god, it’s crazy how they've maintained their goodness for 30 years. With this album they recaptured Seven Churches in a modern form. Keeping the vocals, the same style, songwriting is similar, the drums sound great, and its heavy as needed. And yet again, they mixed death and thrash metal perfectly! I swear, this is Seven Churches reborn. Everything about this album is just like Seven Churches; just as great, just as similar, just as good. Nothing disappoints.

Also, new lineup. The only original remaining member is vocalist Jeff Becerra, and holy crap, he did such a great job on this record. His vocals are just as loud, rough, and deep as death metal, while keeping that thrash style vox in there as well. Just like the vocals on Sodom's "Tapping The Vein", which is a death/thrash album as well, they both perfectly balance the vocals just as they should be; half death metal vocals, half thrash. Comes together to create such amazingness that fits the music perfectly. This new lineup is insane, they're all greatly talented musicians and they're keeping Possessed alive and present. Like I said before, I was positive most people weren't expecting much from this album, but now its out, and it’s one of THE BEST of 2019. This just proves that metal is nowhere near dead, think about it, Possessed randomly decided to release an album after 30 years of being inactive in the studio and it turned out amazing. What are the odds?

The guitar playing is magnificent. Just like with the vocals, the guitar has the perfectly balanced death/thrash sound. Not too heavy, not too thrashy, a great mix which perfectly resembles the style of Seven Churches, and Possessed style in general. None of the songs here are boring, every track is equally as great as the last, and the talent and speed of the guitar playing keeps you energized and focused. The drums are also magnificent, the sound of the drums fits with the guitars perfectly, and the bass guitar backs up the drums great as well, too. The drums help create the songs and develop their structures. In the song "No More Room In Hell", there's an energetic and catchy riff, the drumming backs it up greatly. That's one of the most awesome things about this album, everything goes hand in hand. When all the instruments are on time, balanced in sound and tempo, present, and relentless, there's no doubt that nothing but a kickass album will come out of that.

Again about the vocals, Jeff is doing such a great job, especially since he’s paralyzed and in a wheelchair. In some songs he can get melodic with his vocals, like in the track "Demon", he sings away with the melody of the guitar and follows it perfectly. SO GOOD. His vocals are easily my favorite aspect of this entire album. To recap the vocals, they're greatly balanced, persistent, heavy, and talented. One of the greatest and most talented vocalists in the entire death metal genre.

Revelations of Oblivion is a bone-crushing, mind-shocking album. Possessed put out their 3rd album in over 30 years, it turns out amazing, and it's just as great as Seven Churches. 54 minutes of complete satanic triumph that doesn't disappoint at all. We all knew Possessed was gonna release another album eventually, this is what we've all been waiting for. There can't be another comeback album just as great as this one.

This band has definitely made one of the most kickass comebacks in death metal, and the biggest comeback of the decade. They unexpectedly put out an album and baffled the fans, but then turned out being amazing. It's crazy how this band maintained their old sound and created it in a newer form. Bands that create new music while maintaining that old school sound are pure gold. Possessed is one of those bands. If you're looking for some good modern death metal, go turn this on right now, there's no disappointment here at all.

In recent years it seems to be the fashionable thing to jump on the reunion bandwagon and reform a band long-thought dead (and in some cases, the corpses should have been left on the side of the road where they dropped, but I digress). The list is endless with bands that are reforming, putting aside old grievances, and wearily trekking back into the studio to get some “lost” and invariably useless steam out of their collective systems. Granted, there are exceptions to this rule, but as a whole the reunions are sterile cash-grabs that reek of opportunism and boredom.

Possessed  is the happy exception to this typical sterility flaw.

After 30-plus years or relative silence from the Possessed camp, the latest album, Revelations of Oblivion, marks what can only be described as a tumultuous shot in the arm for death metal (yes, Possessed is death metal, whine and proselytize all you like). I understand Possessed had been somewhat active in the early 90's, but without frontman Jeff Becerra, quite frankly, it doesn't count. It's the old adage of, better late than never that rings deep within the wells of the ear canals with this release.

The opening single that was leaked some weeks back, “No More Room in Hell” immediately took me back to my bedroom in 1985, where my 14-year-old self was so enveloped by what this album spinning on my turntable was doing to my entire being. I was forever, irrevocably changed. Seven Churches is, by all accounts, a death metal masterpiece that has not only stood the test of time but managed to change the face of metal music so perfectly. I'll admit to going into Revelations of Oblivion with some initial trepidation; it's one thing to shoot your proverbial wad in one or two singles, but can Jeff and crew actually pull off a full album's worth of equally tangible music after so long? Would it be a welcome addition to the band's seemingly small, yet important lineage? The answer to both of these questions is a resounding yes; Possessed hasn't missed a single step in all of these years. Granted, the core line-up of Becerra, Mike Sus, Larry Lalonde and Mike Torrao is long gone, but the fold is filled out nicely with Emilio Marquez (drums), Daniel Gonzalez (guitars), Robert Cardenas (bass) and Claudeous Creamer (guitars). This new and improved Possessed is proving to be one hell of a resurrection.

Jeff Becerra's vocals, quite literally, haven't changed one single iota in nearly 35-years, and that in itself is pretty amazing. It's one thing to growl and grunt into a microphone, as one doesn't really need to assimilate within a certain tone or recognizable quality with such vocals, but Jeff's discernible tone has set him apart from all others in the field. Jeff, Kam Lee, Paul Speckmann and Chuck Schuldiner set a high bar in terms of early death metal vocals, and the fact that you can hear this new record and immediately ascertain its validity and historical context is leaps and bounds over almost anything else released these days. The band is as tight today as a unit can possibly get, and with all pistons firing on an even field like this, how can the album possibly be faulted? I've already heard ridiculous notions of the album being “over-produced” and the vocals being too high in the mix, and to this I can humbly claim that one seemingly doesn't seem to get it, but you're entitled to your own opinion within the confines of your personal enjoyment. I fully understand the charm and essence of Seven Churches and how the album sounded muddy and thin, despite the demo Death Metal being even more deadly and raw than the actual release. That said, why fault a band for finally having some passable production values? At no point does this record sound “thick” or unnecessarily crunchy; the sound has the right amount of punch and clarity without giving way to a stifling bass, over-accentuated drums, or buried-in-the-mix vocals. Lords help us all – Possessed managed to afford better production! Better throw up the spikes and dismiss them all as ne'er do-wells!

The songs on Revelations are top-notch satanic hymns akin to the aforementioned Seven Churches, and not a single one of them causes repetitious eye-rolling or involuntary yawning if you're a true study of death metal and its early influence on modern metal music. These new tracks would have been a very worthy successor to Churches. Granted, I still enjoy the band's follow-up releases in Eyes of Horror and Beyond the Gates, but, in my humble opinion, there was a slight loss of even-flow magic in those worthy, albeit innocuous releases. Revelations spills no blood when you hear these songs; they could have well been written in 1985, and that summarily touts the new and improved Possessed as a worthy addition to today's bevy of bands cultivating and keeping true this precious medium of death metal. Lyrically, the songs are as base as they need to be in that they don't raise deep philosophical questions or leave you running for a thesaurus, and this simplicity is what made and makes Possessed the legend it is. Jeff's lyrics have always touched a nerve with me, and forever will, especially on the track “Ritual,” which is about as evil a song as you can possibly ask for today. Jeff hasn't lost a single step; I can't say enough about his triumphant return to death metal greatness.

While the entire album is virtually flawless for me, I've actually sat here and tired to limit my obvious and disgusting fanboy moments to critical thinking and honest dissection when taking on this review. In all honesty I can't find a single thing wrong with this record. With Possessed you don't ever expect a Cradle of Filth-typeventure into some long, poetic ramblings that have you running for ancient texts of poetic soliloquies in your local libraries (do people even know those lovely buildings still exist?) What you get is a pattern of familiarity and resonance that can guide you into a 53-minute jaunt into the various levels of Hell, and you will find yourself all the better for such a trip. It's the return of Possessed, man - just enjoy it!

Possessed is a band that takes me all the way back to my youth. When I think of the band from past days forward, I always recall that album with the fiery logo and huge inverted cross staring out at my young, impressionable self in a Chicago bedroom. I was searching for something back then. I think we all were, no matter your personal time frame or era. We find connections with bands and musical journeys. Mine started with the Beatles, found Black Sabbath, ingested Judas Priest, Iron Maiden, Saxon, Venom, Mercyful Fate, Hellhammer, Slayer and Possessed and I haven't been able to look back. I've never sat with any forced introspection as to if I took to right musical path in my 47-years. There is no looking back with questions for a real heavy metal fan.

None of us ever can or should.