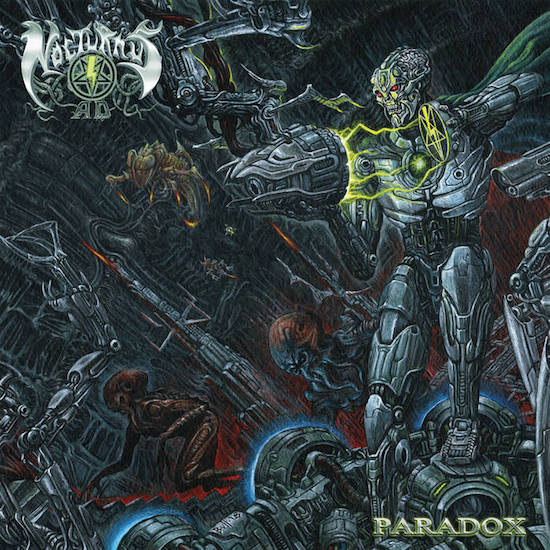 ::   ::
Type: Full-Length
Release Date: May 24th, 2019
Label: Profound Lore Records
Genre: Death
1 Seizing The Throne
2 The Bandar Sign
3 Paleolithic
4 Precession Of The Equinoxes
5 The Antechamber
6 The Return Of The Lost Key
7 Apotheosis
8 Aeon Of The Ancient Ones
9 Number 9
MetalBite on YouTube

From the ashes of Florida's legendary Nocturnus emerges...well, Nocturnus AD. After wanting to disassociate themselves from the former moniker, Mike Browning assembles a new, improved Nocturnus and produces a finely-crafted piece de resistance with Paradox.

I'll be perfectly honest, I'm an original Nocturnus fan from the very beginning, and hearing rumblings about this new lineup and name change filled me with a bit of causal trepidation. After the debacle that was Entombed AD, not to mention a bevy of other bands reforming under slightly augmented banners, I wasn't sure what to make of this. I knew well Mike Browning's dedication to the death metal underground, so I let the CD do its speaking.

Utterly fantastic! Not a single bit of hesitation should be had here.

I utterly hate to use this term, but there is a very technical side to this sort of death metal. The sweeping riffs, the careful-crafting of properly initiated keyboards to set a tone and air to the music, and the raspy, yet clear Browning vocals all defy modern death metal sounds. This entire album moves along like one grandiose piece of heavy metal opera. Now, before people go ballistic over that seemingly foreign genre, I use it in the most base form. Paradox feels like one long story (and it is; read the lyrics here and on 1990's The Key and see) that just pulls you in and challenges your senses. This is not a layman's death metal band, and this is not a lethargic person's album – this is a thinking person's metal album in every solitary way.

Paradox disseminates pure heavy metal throughout its 52-minutes. I dare say this transcends death metal and branches out into some thrash, power, speed and traditional metal; it literally has something for everyone. The musicianship is absolutely top-of-the-line, giving away nothing to triviality or mediocrity. When you hear the term “riffs for days,” it usually fixates on one repeated riff over and over that, while catchy, doesn't move beyond the initial movement. Nocturnus AD takes these traditions and not only builds on them, but embellishes to the point of fantastical perfection. In short, this is the very type of album that makes heavy metal what I've always said it is: the thinking person's music. Saying nothing of the lyrics yet, you somehow feel vastly more aware after hearing the arrangements on Paradox. The wall of sound presented here is almost too enticing to be a simple 'death metal effort.' It transcends the obvious.

Lyrically, Paradox follows the brilliance of The Key by following the harrowing tale of Dr. Magus who fashioned himself a bio-suit to ward off the continued ravages of a plague. Rather than just 'phone-in' the visuals painted herein, Browning unleashes a torrent of fascinatingly dark visages to help the listener assemble a firsthand view of what is happening within the frame of this work. This reads like an Asimov or Heinlein story that just defies logic and everyday existence and makes you examine a world outside our own. It's just brilliant in its full capacity, and you need to examine both albums for yourself (if you haven't heard The Key, stop reading immediately and hide in a closet of my choosing).

I'm so glad to see Nocturnus AD rising from the ashes and not only keeping up with the lineage and current climate, but they are raising the bar even higher without alienating the fan base or curious newcomer. Paradox is the every-man's metal album; it defies convention and expands your consciousness unlike any of its worthy peers, past or present. You are elevated to a different plane when you hear the majesty herein.

It's just that damn good!