Nocturnus will always be known as one of the first bands to incorporate keyboard, sound effects and sci-fi lyrics into death metal. What is quite common these days in 1990 was completely unheard of and frowned upon. Mike Browning is one of the original members of aforementioned but we won’t be talking about the past when there is something new being in the works. Nocturnus AD is working on new stuff right now and there is a chance that it will be continuation of Nocturnus legendary album "The Key". 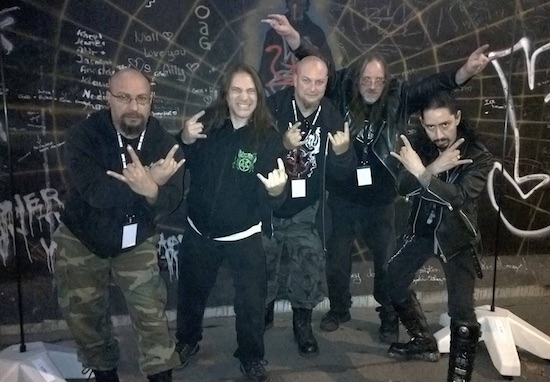 Hey Mike! Thanks a lot for doing this little interview with Metalbite, how are things in Nocturnus AD camp?

Right now we are taking a short break from playing live so that we can concentrate on writing new material, then in May we play Chile and Finland in June.

You've been doing a lot with Nocturnus AD lately so what is the situation with After Death at this point?

Since it is the same members in both bands, we just took a little break from After Death. I started that band in 1999 actually and have kept it going in several different forms, so it was good to take a break from it for a while. We will definitely keep both bands going though, so maybe we can just open up for ourselves on tour! LOL

Last time we've chatted you mentioned Nocturnus AD working on new material, how is that coming along?

We don't get to rehearse a lot, so the writing process has been slow, but now that we have taken a break from playing shows, the writing has started taking off a lot better. I am very pleased with the 3 songs that we already have finished!

Do you guys write new stuff collectively, what can we expect from new material musically?

Yes, we have been trying to write all the new material in the practice room when at least most of us are there, the guitar players just start by playing a new riff and I add drums and we start adding everything from there and basically build the songs right then and there.

Who's responsible for what?

I try to get the whole band there when we are writing the music and after that is written, then I write the lyrics for it.

Since lyrics are your responsibility, is anything written, will it be a continuation of the story from "The Key"?

There is a slight difference between After Death and Nocturnus AD sound, which one are you leaning more towards with the new stuff?

Your fans most likely have humongous expectations if it comes to the new material and I'm sure you understand that everything will be under the microscope and there will be no short hand in opinions about everything involved. Have you thought about it, are you nervous at all?

I know that anything I do will never probably pass up what happened with The Key and part of that was because it was back in 1990, but the few people that have heard some rehearsal recordings said that it definitely sounds like Nocturnus, so as long as people think it is a good continuation of that Nocturnus era, then I think I would consider that successful, especially since most people are critics these days! LOL

And the wait continues (LOL), there is something else I've wanted to ask you about however, how is restoration of that 57 Chevy going? Are you going to keep it original or will it be updated into some crazy hot rod chick magnet monster LOL?

It is being completely overhauled, I had to replace the whole floor and trunk floor, so it’s getting pretty much a full restoration, but instead of making it back to factory, I am doing an evil looking custom hot rod out of it.

Why that particular car, what's the story behind the choice?

I remember an old friend of mine had one in high school and even back in 1982 it was just awesome to ride around in a 57 Chevy, which is one of the most classic cars of all time.

Thanks a lot for your time, if there is anything else now would be the time to get the word out. (LOL)

I just want to say: Thanks for the support and that we will at least have a new demo of songs out this year, if not a new full album by the end of the year!