Few years ago, I witnessed a live show craze created by Blood Red Throne. It was something that I still remember quite vividly, so when by strange coincidence I hooked up with Daniel Olaisen via e mail, I couldn't stop myself from asking a few questions. Their new album titled 'Union Of Flesh And Machine' is going to be out soon, and judging by sheer brutality of 'Proselyte Virus', the first song accompanied with lyric video they just released to the masses, it is going to crush and destroy. Before that happens though - here's a quick heads up from BRT camp. 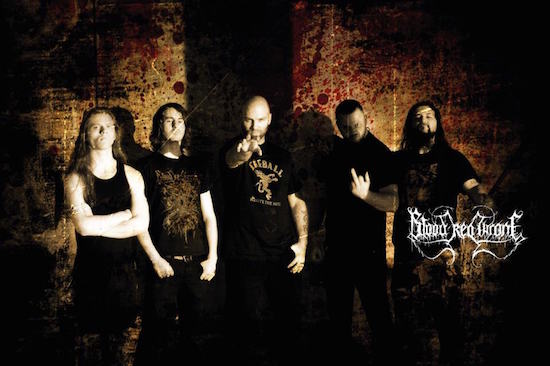 Greetings Daniel! Thanks much for doing this, how are things in BRT camp?

It’s pretty exciting. We have a new album on the line and most likely we will tour new territories for us this year!

New album release is right around the corner but I want to ask about the self titled one. It seems that that one is slightly more brutal, stronger and faster than its predecessor. Are you guys going heavier and crazier with age, what was going on, what happened there?

Brutalitarian Regime had some pretty fast and brutal stuff too indeed, but I guess we stepped it up on the self-titled. It's always a fine mixture between the fast and brutal and the groovy and somehow melodic stuff. This new one is for sure all of this, but it brings kind of an old school feeling to it. Regardless, I don't think BRT has changed too much over the years. We do death metal. Simple as that!

Heavy, fast and brutal combined with groove and melody is what I dig the most about BRT and I was wondering: who comes up with that stuff, who brings the riffs and who does the melodies?? How does it work in BRT?

Exactly. We want the combination indeed. I write most of the songs, but Meathook also contributes with some insane songs. I do most of the lead parts and I'm a fan of melodies, so there you go.

Once again BRT went through some personnel changes, can you introduce current line-up and maybe explain about those changes a bit?

The only change on this new one is that we have the original drummer of BRT back in the band. Emil decided to quit and join Aeon, which opened up for Freddy joining the band 15 years after he left. I'm still here as the founding member. It's Meathook's third album and Bolt and Ole Bent's second album. So the line-up has been pretty steady the last few years.

You've been changing the ratio of brutality and groove from album to album, what can we expect from the new one?

I think all albums have all elements, but I definitely write better songs today than 15 years ago. As mentioned, old school is obvious when describing the new album. There are some real cool riffs and leads going on and Bolt sings better too.

From what I understand Bolt takes care of most if not all the lyrics for BRT, can you tell us what was the subject of his writing on new album?

Usually Bolt writes all the lyrics. But this time Martin Skar Berger, who also mixes the album, did all the lyrics. The reason behind this is that he actually was in the band for a short while when Bolt was out and Martin wrote the lyrics and recorded the vocals. So, I actually have the album in two versions vocal-wise. Anyway, lyrics deal with a lot of the shit of mankind, but also anti-religious stuff.

Can't wait to get my hands on Union Of Flesh And Machine, what formats will it be available on?

Many people ask for vinyl, so I really hope our new label will listen to that. Of course a CD, maybe a special digipack. We’ll see.

I've heard about the LP box set being released some time ago. Can you tell me more about what it is, what's in it, if it's still available and where can one purchase it?

We had our 15th anniversary in 2013 and we wanted to do something special, so we made a few really cool looking boxes containing the vinyl in red, signed poster, lighter, patch, button, pick and a great t-shirt. It's all limited edition and it's sold out now.

Are you a vinyl collector or more of a CD guy?

What have you been listening to lately?

Well, I'm playing at Blastfest this weekend and I always listen to bands playing on same festivals or gigs. So, there's been Audiopain, Arcturus, Red Harvest, 1349, Funeral, Ihsahn, Einherjer, In Vain and Abbath in my stereo the past days.

You're currently a member of 3 or 4 bands, between all the bands you are in and all the things that you do and all the promotion you do for all of it, what do you do to unwind?

Well, believe it or not, I spend most of my time playing football. I never rehearse with any of the bands and I like staying in shape and fuckin' love football. I also watch a lot of TV series. And I listen to a lot of music.

Are there other instruments you play?

Not really. I have a digital drum-set in my studio, but I can't play properly. I play some bass, but it's all about the guitar. Electric and acoustic.

We have major plans to play heavily this year and also visit countries we haven't played. I know Bolt is working on a kick-ass tour in Asia in July, but we'll have to see. There will be many shows for sure!

Thanks a lot Daniel. Hope to see you again in States sometime in the future. Last word belongs to you.

We definitely wanna tour the States again and it will happen soon! Support quality death metal and watch out for the new album. It will destroy!