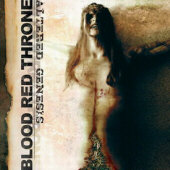 I have been sort of bummed out with the stagnant Death Metal that I have been hearing lately. Sure there have been some very heavy releases but there has been little to get excited over. Would Death Metal Blood Red Throne be that one release that will lighten my state of pessimism?

Norway’s Blood Red Throne is a group comprised of members from such illustrious bands as Satyricon and Neongod, who then set out to bring there own style of Death Metal out of the land filled with the stone hearts and darkened souls of Black Metal royalty. BRT have released a very heavy and very no-nonsense album called "Altered Genesis", that seems to go against the norm in their little country.

The album as a whole is a good one although nothing really to talk about either. It seems for all of the talent that BRT has... it has not translated into the music. Sure, it is heavy and very brutal with the right touches of gore and mayhem - but it never stands out or anything, it just exists to exist. The album wants to stand out -you can tell from the first note - but the material written seems to hold it back and just gives you a roughly average album.

I am disappointed at what Blood Red Throne has released. Their album could have been better across the board yet it could have been a whole lot worse as well. Guess there is something good about average - though I cannot for the life of me cant verbalize one right now. This is a good album but it left me wondering if BRT could have done better. I say yes, after thinking about it awhile.