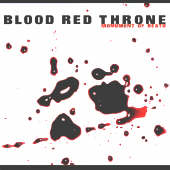 It's hard to believe that Blood Red Throne and Green Carnation are both the brainchildren of the same composer! What a big difference in style! This beast was created in order to journey back to his roots in the death metal realm. Well he succeeded, and in a very violent way I might add.

Blood Red Throne is so aggressive that the entire product is filled with blood spilling all over the place, on the cover art, the musicians shot dead in blood bath and even the CD itself has blood on it. So what do we have here? Raw, aggressive, fast tempo, deep death vocals with a good production work thanks to Endre Kirkesola. An incredibly good rhythmic section is bound to keep many headbangers happy. But what struck me the most is the ever-changing mode of these well-executed complicated violent musical phrases. Of course the obvious thing to notice is the superb guitar work either in the shape of riffs, lead and solos involved. Some samplings and slower passages also will give your head a break such as in songs like 'The Children shall Endure' or 'Dream Controlled Murder.' My personal favorite one is 'Ravenous War Machine' for all the elements described above plus the addition of a superb lead guitar run and a great guitar sound effect as it ends.

Just to make sure that you won’t think I went crazy, Blood Red Throne is not the first band that plays death metal in Norway but somehow as frequently as we use the term ‘Swedish Death’ we don’t do this with Norway. Well then, from now on we have ‘Norwegian Death’ and believe me it doesn’t yield anything from its bigger and more famous neighbor.

So what does ‘Norwegian Death’ sound like? When operating in the hyper-fast areas of their songs, the main riff ideas come from a black metal book, while the mid-paced to slow areas are borrowed from Florida’s death scene with a too long list of influences to mention. Tchort (Green Carnation, Emperor, Satyricon, Einherjer) teamed up with Dod (Satyricon) and behind very well written riffs they unwind their talents for 40 min of nonstop rage and aggression. And I mean a whole 40 minutes; even breaks between tracks are suppressed to a half of a second so you won’t have time to pick your teeth up from the floor because the new blow is already landing on your face. Sweet, just the way we like it. Thanks to an excellent production from Berno studio, “Monument of Death” sounds raw, like good old school death metal but has a crisp and clear sound making it sound unbelievably tight.

And quick note for special edition collectors, the first 1000 CD's will come in a suicide-kit and will be hand numbered with real blood of the band members and a razor blade.

Bottom Line: “Monument of Death” will satisfy any metal fan craving for untainted fury not disturbed by any keyboards or computer samples.