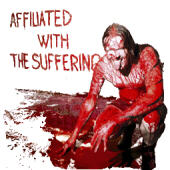 One thing that you can say about Blood Red Throne is that they are regular and have sequential minds. On their first album "Monument of Death" the guys were depicted as being murderous and blood was all over their product. Now with this follow up ("A Taste of Blood" being a mini album), you see all of them dead, covered by a blanket, having a tag on their big toe to identify them at the morgue. This makes me laugh and I guess that's what we can call 'black humor'! I don't know about your sense of humor but to me I found it funny.

According to my bleeding ears, you can count on Tchort and his mass murdering friends for delivering one thing: solid, brutal, technical and straightforward death metal. Those of you who liked "Monument of Death" will definitely enjoy this new one and maybe even more. It is actually walking in the same path as its predecessor. They brought very few changes and "Affiliated With The Suffering" is presenting no more and no less than quality Metal that fans can count on. The songs are short, about 3 minutes each and they all come to a sudden end.

The major difference with this new release is the rawness of the songs. It doesn't have as many lead or solo parts and the hectic rhythmic section is really taking the lead role with an even more guitar driven (riffs) orientation. I also found the compositions more repetitive thus closer to earlier Death / Black roots. Definitely an album for the hard head banger type of fan. Some songs are sticking out with interesting elements such as lead or solo sections, slower kind of Doom atmosphere and some prog structure as in 'Bleeding Lament,' 'Chaos Ring' and 'Malediction' which is the last song but they also included two more songs after without mentioning it.

Bottom Line: Fans of the genre, you'll get your money's worth.