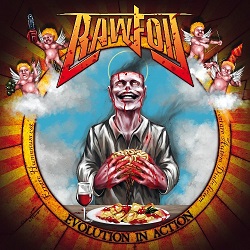 I am always looking for new thrash band: this passion is almost pathological. With this mindset, it is probably no wonder that I am familiar with the name Punishment 18 Records, because this busy Italian label promotes fantastic thrashers like Battery or In Malice's Wake, good bands like Home Style Surgery and, well, some less strong combos.

Now P18 has released the debut of Rawfoil, a formation that also has its home base in Italy. I don't know why it took seven years since the demo to finish this album, but I can tell you that the quintet does not offer extraordinary compositions. Tracks like "Broken Black Stone" rely on a pretty strong riff during the verses, but they appear slightly incoherent due to some questionable breaks. The fact that the quite mediocre backing vocals show up many times does not make things better.

On the other hand, Rawfoil do not lack energy. No doubt, less tempo changes would have been a good idea, but I am not writing about progressive or overly technical thrash. The jagged riffs are typical for thrash metal, some of them hit the bull's eye, while others remain interchangeable. It would be unfair to call the Italians just another thrash band, because it seems as if they have put heart and soul into this output. Unfortunately, the musicians stand in their own way. The instrumental beginning of "Demons Inside" promises a highlight, but the entire energy of the song crumbles as soon as the melodic (and lousy) chorus sets in. Okay, the production can be considered as contemporary but not too modern and some more talented composers would love to hear their songs with such a sound, but Rawfoil fail to derive benefit from this situation.

At the end of the day, there is a sufficient number of good sequences, but there is nearly no song that makes fun from the beginning to the end. This is almost a tragedy, because the technical skills of the dudes are not in doubt. Fortunately, the thunderous "Circle of Hate" marks the exception. This high-speed eruption of anger shows that energy is still a main component of thrash and the riffing combines Exodus with Testament in a competent way. But generally speaking, I regret that Rawfoil are among the less strong combos of P18. On Evolution in Action, evolution is rather necessary than in action. Let's see, whether they will get a second chance.