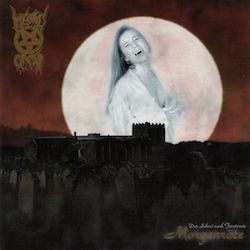 Mystic Circle were probably not the most authentic black metal band from Germany and many members of the scene made jokes about both the image and the music of the band. Honestly speaking, not without good reasons. I admit that I did not realize it immediately, but already the artwork is slightly embarrassing with this woman in the moon that shows her vampire teeth. However, this does not say much about the music, if I am not mistaken. The production is of higher relevance, but sorry, it also does not hit the bull's eye. Flat guitars are accompanied by a lifeless snare, the bass guitar is missing due to whatever reason. Especially the fast parts suffer from a lack of atmosphere. All in all, the mix spreads a rather amateurish flair.

But now it's time to speak about the music and the first thing I must say is: too many female vocals! Mystic Circle show their version of the tiring the-beauty-and-the-beast-approach in each and every track. Unfortunately, neither the female nor the male vocals convince, and they bring stupid lyrics to the light of day:

This is not the only flaw. Maybe due to the emotionless production, the rapid sequences of the single tracks lie in close proximity to each other. Just like the lyrics, they are executed without any form of finesse and aggravating the situation, they lack catchiness. In other words: the melodies are pretty ill-defined. Some atmospheric breaks try to introduce further facets of the band's portfolio, but they are not cleverly integrated and so they appear as a kind of stand-alone solutions. The result comes as no surprise, a homogeneous overall impression is completely missing. The entire first half does not deliver really interesting sections. The band commutes between a clumsy copy of Cradle of Filth and pretty conventional melodic black metal without reaching the class of hordes such as Ancient. Vehemence or (fairly dark) romanticism? Mystic Circle were not able to make a clear decision.

The output's second half is better, especially because of "Kiss from a Vampire". To my big surprise, this is a real highlight. Here works the concept of the band excellently. A very catchy bridge and the compact chorus crown a powerful number and even the female vocals do not ruin the track. Instead they convey at least a small portion of dedication. "Octobermoon" has a partly good melody and the chorus of "Medina (Satan's Whore)" possesses a slightly demonic touch and a more or less good flow. Too bad that its cheesy bondage intermezzo sucks. It is as ordinary as lyrics like "she stands there with leathercloths". So, I bet you can understand that this album is nothing else but black metal from the pretty greasy third or fourth quality tier. Debutants have the right to fail occasionally, but here the failure has become the norm.