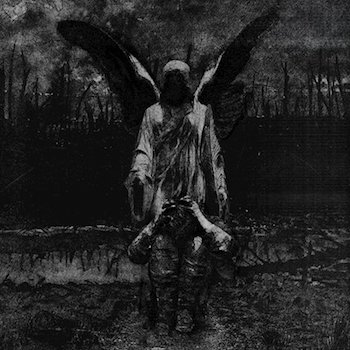 The Suns Of Perdition - Chapter I: War, Horrid War is the fourth album of Canadians, which I came across quite accidentally, when YouTube showed me Panzerfaust’s - 'God's Gonna Cut You Down', from EP The Lucifer Principle, which was a Johnny Cash cover by the way. I felt shivers down my back, which later turned out to be the first blow of the whip. When in spring of 2019 I saw their new record among the promos, I smiled, and again, the whip lashed my back.

The album consists of only 5 songs lasting a total of not much more than 31 minutes of music described as black metal, but is that right??? As the title suggests, the subject of the album is war, and in war, just like in Panzerfaust's music, looking for god is in vain. So, black metal it is. Yes, the foundation is undoubtedly black, stinking of sulphur, filthy BM, but I assure you Panzerfaust has long come out from this hole. In their music you can hear clear influences of sludge and death metal, and sometimes you can taste a subtle flavor of industrial metal. The guitar grinds like the good old Nihilist. This is best heard in the introduction to 'Stalingrad, Massengrab'. It is a well-arranged, fast track, in which the high-pitched tones of the guitar are intensified by the sounds of the Messerschmitt’s pitching over Stalingrad. Goliath's vocals are so powerful and rough that he could easily replace sandpaper. It reminds me a little of the vocals of Stawrogin or Necrosodom. The rhythm section (Morbid-bass and Lord B.-drums) also did a great job enhancing the strength and weight of music and its war-like character.

'The Day After 'Trinity'' is as energetic as the power of "Gadget" fired up by Oppenheimer. This song has everything from a scary and disturbing atmosphere through musicians' artistry. Similarly, 'The Decapitator's Prayer', builds the atmosphere and accelerates - to finally tear off your head. The different skids on the album are 'Crimes Against Humanity', which is actually a 2-minute break between explosions. And 'The Men Of No Man's Land' is a 13-minute majestic monster that we face after the end of every war. Ashes and conflagration. This song excellently portrays the demons of war swirling in the head of the survivor who lost everything else, including humanity. As if character from the cover. Although I am aware that this song may be difficult to digest for some listeners, I know that it may be a gem for others.

I have to admit that although this album overwhelmed me for a long time, if it wasn't for this fuc... COVID-19 and the impulse in the form of Chapter II announcements, this review would not have happened. I know that no one's life was saved, but I am aware that I shared with you how amazing The Suns Of Perdition - Chapter I is. Although I’ve missed Canadians show in Łódź last year, now my presence at their next concert will be mandatory.

Panzerfaust is an extreme metal band which plays a blistering form of black metal whilst covering themes surrounding war (WW2 specifically) on The Suns of Perdition I: War Horrid War. They parachute out the plane with 5 tracks worth every second of your attention. Upon first listen, it felt like a song or two was missing, nevertheless, the music is constructed in a very awarding fashion whilst depicting a dramatic scenery. Panzerfaust could roughly be categorized alongside the likes of 1914, but their sound is more rooted in a black metal. Their approach of using classical samples and sound effects gives the listener a clear image and strong feeling of the era they’re trying to convey. Played between fast moderate tempos, Panzerfaust manages to carve a baleful atmosphere of dread; hence the items discussed are of great significance to this day.

Songs such as opener “The Day After Trinity” and “Stalingrad Massengrab” have a potent feeling of fear accompanying them hence the former deals with an atom bomb (I think) that was designed in Los Alamos, New Mexico in 1945 and successfully tested, whilst the latter tackles the battle of Stalingrad which is cited as  “one of the largest, longest and bloodiest engagements in modern warfare”; more than 2 million troops participated. The drumming and guitar leads on those 2 tracks excel at setting the tone. Hearing the turbines and propellers of the planes cut through the skies matched with the intensity of the drumming and guitar leads, paint a rather brutal and apocalyptic atmosphere. The kind you would expect given it was such a large and catastrophic war involving the Nazis, Russians and Axis forces.  What I have found very misleading is the sound used by Panzerfaust on The Suns of Perdition I: War Horrid War; the band is Canadian, but the record’s production is strikingly similar to that of Polish black metal bands. It brings to mind the likes of Hate and Arkona, in which usually have a very bass heavy and lively guitar and drum kick. Even the vocals have a Polish feeling considering the way in which the rasps and raw sort of grunts are delivered.

As stated before the record sums-up to about 31 minutes making it a tad bit short by my standards when referencing black metal (though this is only black metal sound-wise), but the flow of the music, organization of the songs, and general craftsmanship is enticing and creates a concise and more-so cinematic appeal. It’s definitely a well-thought-out record; every moment presented submits to a pre-ordination of sorts; therefore, fitting and latching-on delicately. Early on entries are rather short, spanning about 4-5 minutes each, whilst later material e.g. “The Decapitator’s Prayer” and more notably, “The Men of No Man’s Land”, conjoin in displaying a cooperative union of the record’s strengths and highlights. There’re no unnecessary moments to be found on The Suns of Perdition I: War Horrid War, every note fits within the confines of the matters brought to hand, making it a linear (in a good sense) and disciplined record. It's a total team effort, all elements play their roles efficiently and effectively. However, the drumming is for me the most impressive feature, whilst playing to the tune of standard black metal, there are instances of shifts in tempos lending a technical yet supporting hand to the lead guitars heard. It’s a tight and focused drum attack that exploits the clear production.

The Suns of Perdition I: War Horrid War is a very strong record, it’s a chapter in extreme metal that has been covered before, but hearing it played with such prudence calls for emblazoning.