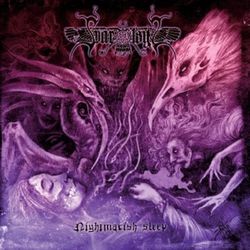 I never know whether or not I should appreciate the intrinsic motivation of those dudes that run a one-man-project. On the one hand, nobody can deny that some of them have enriched the scene, for example Varg Vikernes - regardless of his criminal bullshit. On the other hand, I think it would be fine to allow more facets to a musical offering. However, Ornias marches his way stoically and offers reliably new stuff under the banner of Svartsyn.

Nightmarish Sleep presents another portion of black metal which is capped by thick lava flows. The droning sound shapes an opaque surface and I don't think that this is easy-listening-back metal. The structures of the songs remain almost hidden, while the guitars celebrate mercilessly the triumph of an unknown dark might. I wish I could say that this approach results in outstanding tunes, but honestly speaking, there is not much that keeps sticking in the ear. The hellish catchiness of previous highlights such as "Demoness with Seven Heads" has not found its place here. In other words, whenever I take this EP from the shelf, I feel like someone who is suffering from amnesia: everything sounds totally new for me.

Unlike some other bands that abuse their EPs for pretty stupid experiments, Ornias is not interesting in leaving his well-known path. Any surprising elements don't occur. So, it's the main challenge to decode the non-conventional patterns, but it's a quite tough job. The artist doesn't do anything wrong, but he is also not able to present some sections that distinguish themselves from the remaining parts. No song stands out, no song is left behind. Honestly speaking, I expected a little bit more, inter alia due to the fact that the music fails to generate a horrific or terrifying atmosphere - and black metal without atmosphere is always somewhat handicapped. Anyway, those fanatics who want to have a complete Svartsyn collection get a more or less solid piece of music. It just needs an intrinsic motivation from the fan base as well.