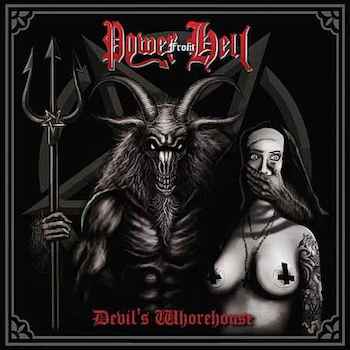 Here we have a special crew: ladies and gentlemen, Felix proudly presents the Brazilian champions of shitty artworks. Devil's Whorehouse might not be their prime example of idiocy, just remember Sadismo. However, the cover is ridiculous. But I have to stay fair. And honestly speaking, this is no big challenge for me, because Power from Hell play very casual black thrash. Absolutely reduced to the essentials and without any surprising twists and turns, they spit their snot into the audience. To call the pretty dull production crude is still a euphemism, but probably this is exactly the sound the band asked for. No high gloss, please!

Either way, I would be wronging the dudes if I did not emphasize the fact that they deliver at least one big surprise. "Long Road to Hell" shocks with a bluesy pattern and sounds like the criminal brother of "Night Prowler", a number from 1979 which was performed by an almost unknown band from Down Under. Sorry, I have forgotten the name of these Australian dudes - cannot keep all these irrelevant formations in my mind, but I guess the song was the closer of an album called "Highway to Power from Hell". It doesn't matter... I do not know whether I like this experiment of the South American trio, but their typical tracks make me grin maliciously. These lads are surely not the world's best instrumentalists, but they have a knack for effective, compact tracks. They create filthy gems by using simple means. I do not say that each and every track delivers such an explosive mix that a poser dies somewhere in the world whenever Devil's Whorehouse is doing its rounds on the turntable. Nevertheless, some tracks are great.

For example, "Revelations of the Flesh" speeds along the metallic highway and represents the majority of the tracks very well; short, simple, straightforward. There's not much left to discover after having heard the album for the first time. Okay, "Black Forest" seems to be their dark opera with a playtime of almost five minutes and a spooky first half. It remains the only song which creates an atmospheric depth and it meets the further highlights, especially the first tracks of the A side, on an equal footing. But to avoid misunderstandings: Power from Hell do not deliver interwoven patterns, hidden technical details or backward messages. Anyway, the pretty hideous riffs from the highly respected schools of Bathory, Venom and Aura Noir still spread their fascination.

All in all, the music will convince black thrash freaks who like the sub-genre in general and those who have built an altar for Quorthon's debut. (The riffing of the ninth track seems to be borrowed from "Necromancy".) I enjoy the album as well, albeit some lyrics suck. The climax of poetic bullshit is the line "Women scream in pleasure while being raped". Hopefully, the guys will never get caught by some starved homosexual berserks, because I don't want to hear the musician's screams of pleasure. And, as already mentioned, the artwork is dubious as always. Thank God, I am immune against this form of covers. That's why I did not buy the CD - and I will not tell you that I preferred to get the vinyl format.