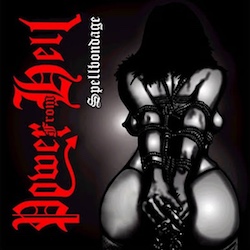 Profound Evil Presence, the current album of Power from Hell, features simple yet smoothly flowing songs that reflect a good musical understanding while profiting from a professional production. Spellbondage, their work from the year 2009, is different. Very different.

First things first, we must focus on the (so-called) production. This is usually not the most important thing for me as a non-high-fidelity-fetishist. Yet it becomes the main problem whenever one is confronted with a sound that has the power to kill the entire output. Exactly this is the case here. The guitars remain flat, the ridiculous reverb of the vocals does not make things better and, worse still, sometimes the material suffers from volume fluctuations. Or it sounds as if a partly scratched vinyl has been played too many times. No doubt, this production was done by a deaf man after 72 hours without sleep. Or by an idiot without external contacts who was practicing quarantine for the next appearance of a malicious virus instead of looking for a second opinion. Rasping guitars can be a good thing, but a sickly rasping, massively flawed production ruins an album.

But honestly speaking, the 4/4-rhythm dominated tunes also do not make the day much brighter. The guitar work during a lot of tracks is amateurish, predictable and primitive. The 7th track is the first one which is kicked off by an interesting guitar line. 'Fetish of Hell' convinces with dynamic, dark melodies and power. Too bad that another production flaw rips the ears at 1:56 minutes. Nevertheless, this song is a highlight…

…a highlight of a release which is – despite its technical shortcomings – not that bad. I don’t understand how the band got a label with this material, because it really lacks finesse and remarkable musical skills. But some of the songs have a rough charm and maybe we should accept them as the roots of the style that Power from Hell play today elegantly. The voice is monotonous, surprising breaks are absolutely not available and the riffs hail the filthy master of minimalism. And yet, under all these layers of amateurism, imperfection and production disaster, the shabby heart of the band beats with stoic self-confidence. This deserves respect, at least to a certain extent.

A Bathory medley with a pretty strange selection of Quorthon (R.I.P.) tunes finishes the album. Well, cover versions are no core competence of the band (avoid their bloodless adaption of 'Freewheel Burning' at all costs) and the excerpt of “The Return…” shows that one can play this tune surprisingly powerless. Cruel Force did it much better! So, all in all, Spellbondage constitutes an output for people with a very, very strong faith; you must believe in the power of black/thrash metal, regardless of its production. Otherwise the album will remain a dubious thing. 65% for the music minus 10% for the mix.