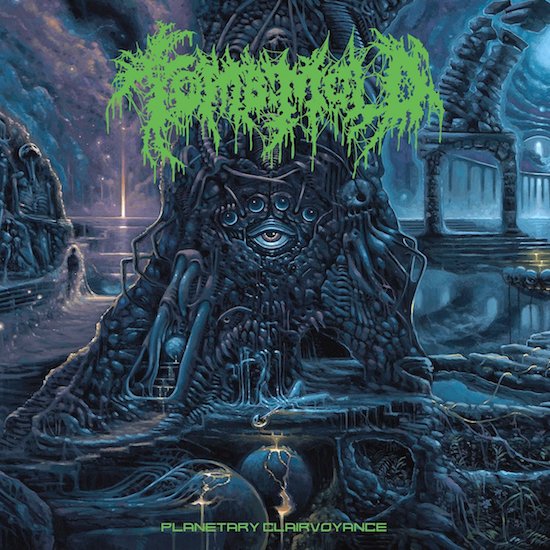 Canadian death metal… perhaps more well-known for their dazzling technical death metal acts since the 90s starting with Martyr, Quo Vadis and others, and leaking into the modern day with countless stalwarts such as Archspire, Beyond Creation, First Fragment, etc… well, as it turns out, the Canadians also produce some quality "primitive" death metal, spearheaded by the underground sensation that is Tomb Mold. This is their third album in as many years, and while I haven't completely familiarized myself with their previous two outputs, Planetary Clairvoyance is an Earth-shattering display of old school death metal with some modern flair.

Tomb Mold is certainly primitive - the main makeup of the music consists of putrid riffs that invoke visions of death and morbidity, pummeling the listener track, after track, after track. The riffs mainly feel influenced by bands such as the legendary Incantation, but also some Demilich oddities thrown in along with a hint of golden era Autopsy, and the impeccable Bolt Thrower. A throwback for sure, but Tomb Mold is refreshing enough to not feel like just another stale worship band.

Despite its cavernous display, there's actually a lot of cool melodies played on this album. Brutal yet engaging leads are sprinkled throughout most of the tracks which add an extra layer of depth and emotion to the music instead of just feeling like a wall of riffs with no substance to back up their aggression. It gives it that cosmic feel that they were trying to go for with the lyrics, album cover and overall theme of the record. Space is certainly a close companion of death metal thematics, but Tomb Mold actually make you feel like you're being warped into a black hole, lost somewhere in the infinite crevices of space.

There isn't too much to say about Tomb Mold that hasn't been said already… they certainly know what they're doing and have extensive knowledge of their chosen subgenre of metal, and it shows on this album here. It's heavy, it's engaging and it remains fun while continuing to keep that grit that we all know and love from death metal. Now, beg… beg for your pitiful life to be spared in the face of our inevitable heat death.

Admittedly, I'm late to the Tomb Mold party for whatever reason. I'd seen the name bandied about on social media posts and the like, but my older age keeps me on the forgetful side of life these days, so under the radar they fell for a while.

Nevertheless, they are now in my player, assailing me with their third opus, Planetary Clairvoyance, a genuinely interesting and viable slab of death metal by way of Toronto. I fully expected a 'typical' death metal offering, and that's pretty much what I managed to not get; the music is above the fray in its well-crafted arrangements, mixed rather nicely, vocally stellar if a bit familiar (yet perfectly fitted for the music), and lyrically concise. In short, I'm very happy to have discovered this band and eternally angry that I let them pass me by for this long, but I digress....

Planetary Clairvoyance is a fast-paced vehicle into the realm of death metal that supersedes the accepted norm in that there are stylistic nuances herein that push the band above the typical, and that's not easy to do in a medium so rife with imitators and outright charlatans. From the opening track, “Beg for Life,” the volatility begins, pacing itself among some of the better efforts of the modern day, with a pretty heavy riff that sets the morbid tone for the album. Once the vocals kick in, the aura is complete, filling the room with a sense of foreboding and thickness only a death metal enthusiast will understand. The rest of the album follows this perfectly-drawn line, shape-shifting the music with great time changes and 'riffs for days.'

The one thing that excites me about a band like Tomb Mold is their ability to occasionally and intelligently insert acoustic, introspective parts into the songs that never break the flow of the piece.  It's a talent that too many abuse and randomly place about like some belabored puzzle on a dining room table. The band also recognizes the importance of flow so that nothing here is forced, be it the malevolent speed and battering of verse riffs, or the slower engaging of slower sections. This album manages to push those boundaries to their logical apex.

I was really impressed with the massive wall of death metal that was displayed with Planetary Clairvoyance. Each track, while nestling nicely within the confines of each other, found its own particular place among the fray. One of my favorite songs here is “Phosphorene Ultimate,” a sort of ethereal-sounding dirge that seems almost spacey in its delivery and arrangement, but somehow is a perfect break between the speed of the title track and “Infinite Resurrection.” For my ears, there seems to be a very interesting varying in the music on this album; it doesn't read like your typical death metal album, which is pretty damn amazing. I know I'm probably the only person who might hear this, but in some of the guitar riffs and time changes I hear some Jeff Loomis-Nevermore tones, which only makes me more drawn to this release. Granted, they are minimal and a blink-and-you'll-miss-it experience, but I definitely hear some interesting variances. The ending track, “Heat Death,” is the absolute textbook way to end an album as great as this. One listen to it in its entirety and you'll no doubt grasp my meaning.

Between the above-board musicianship and impeccable vocal delivery, it's hard to not love this album. Tomb Mold perfectly defines the new era of death metal within the confines of 38-minutes, displaying a natural and attentive love for detail and nuance in Planetary Clairvoyance. I honestly can't say enough about how incredible and entertaining this album is, from start to finish. It moves along like an express train in parts, but then manages to lull the listener into a state of accepted blissful fantasy, only to be jerked forward again within the weighty deluge of the whole musical tempest.

Amazing – in every way, shape, and form.