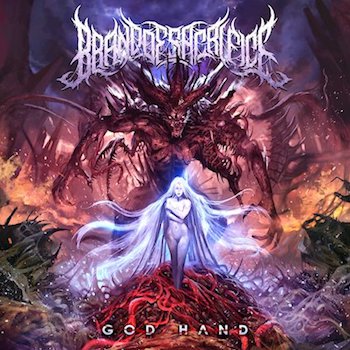 Unique Leader Records have recently added some bands to their roster that explore the most unusual ways of approaching extreme music. Their motto "Unique Grinds for unique minds" is definitely behind signing such bands as Brand of Sacrifice. As the band described it, "Brand of Sacrifice was born from a thirst for an uncompromisingly crushing, modern take on the classic death metal/hardcore formula.  This is achieved by utilizing a number of influences from several musical genres, aside from extreme metal.  Moreover, Brand of Sacrifice incorporates a choir and an ensemble of ancient instruments from past centuries such as the sitar, harp, lyre and many others." On one hand, it's released by Unique Leader Records, on the other hand the band doesn't have an entry on Encyclopaedia Metallum. So, is it metal or is it not metal? It's definitely extreme, but if it's still metal or not it's up for the individual to decide. It's getting added to my playlist for sure.

The drums sound very powerful on this recording, all cymbals sound extremely clear and sharp, bass drums are really heavy and providing really huge blasts through your speakers. You can experience all kind of tempos here, from slow, death metal beats, to furious blast beats and everything between, including very metalcore or djent influences. The sound is more spacious thanks to added echo. Bass guitar is obviously very distorted and makes a very heavy, low-tuned, crushing rhythm section. Guitars are very low tuned and also riffs seem to be flowing effortlessly through various styles, from crunchy low death metal riffs as well as metal-core style chunks of sounds and quite a few moments with pitch shifter, which definitely bring to mind style reminding Tom Morello's style of creating distortions, also an element quite popular amongst extreme bands, like Abhorrent Decimation or Aethere for example. Vocals are just a mix of all kinds of screams, shrieks, growls and "pig-squeaks", also very powerful and adding to the overall feeling of crushing heaviness of the material. But the instrumental variety doesn't end here, there's plenty of electronical music here, drum machine sounds, keyboards and sometimes I even have a feeling as if some guitar sounds were generated electronically. And that's probably where we're approaching the thin line between metal and other genres that I'm not that familiar with, but definitely sound like a good addition to me and it’s still metal to me.

The whole album consists of 10 tracks, with first track being a kind of intro, but to me it just counts as just a regular, but short track. There are two instrumental intermissions, "Hill of Swords", which could be a soundtrack to some movie or video game and quite calm "After Image", it's also quite cinematic, but got less epic character. You can check the promoting single "Divinity" right now and I think it's a good example of what can be expected on the whole album - if you like it, most likely you'll want to browse the whole album. Some Oriental elements are probably taken from the inspiring character behind the band's image - Berserk created by Kentaro Miura. This whole mixture of ingredients is also provided with very good technical skills, the album's production is very clear, it's very easy to distinguish almost all sounds, which must have been quite a challenge with such a wall of them flowing through the speakers. Knowing that it's a band first full-length after EP "The Interstice" released in 2018 (definitely give this one a go), it's very impressive how complex the compositions are and how advanced are the skills of all musicians. Obviously because the tracks are quite short, the whole album can be listened to within half an hour. Very energetic, crushing, smashing half an hour. In my opinion the band can go even further with all the ambient sounds, choirs, electronics and whatever else the band decides to add from outside the metal world and I'm missing one of my favourite elements in metal - solos. I hope they go bigger on the next album, but this one is definitely worth checking out, go and expand your metal horizons and blast it through your speakers at least once and tell me you're not impressed. Or that it's not good at making your non-metal neighbors’ day a nightmare. I dare you! But to be honest I enjoyed listening to it a lot and I can't wait to hear more!