Unique Leader Records likes to put some unusual bands in its roster, not necessarily all of them easy to categorize. One of such bands is Brand of Sacrifice. The line-up is made out of musicians who used to play in different bands (The Afterimage and Ascariasis), different in a way that they were definitely different subgenre of metal. Is Brand of Sacrifice's music still metal? It's probably up to the listener to decide. Has Michael Leo Valeri managed to answer all of my questions? It's probably up to the reader to decide. Enjoy. 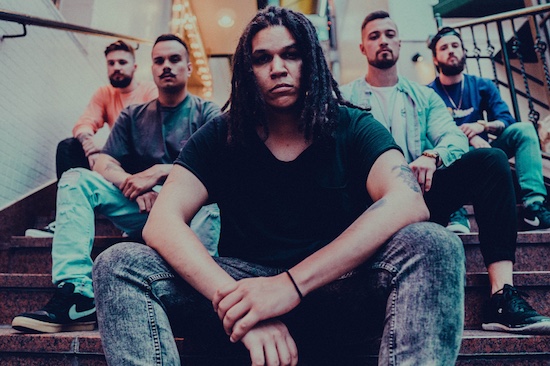 First of all - could you please introduce the band a little. You all have different backgrounds, played in quite different bands, some of them with very different style. Is this for all members a full-time band?

Formed February 2018, front man Kyle Anderson describes the project as such: Brand of Sacrifice was born from a thirst for an uncompromisingly crushing, modern take on the classic death metal/hardcore formula.  This is achieved by utilizing a number of influences from several musical genres, aside from extreme metal. Moreover, Brand of Sacrifice incorporates a choir and an ensemble of ancient instruments from past centuries such as the sitar, harp, lyre and many others.  The band draws its name & influences from the popular manga called Berserk by Kentaro Miura. All 5 members were previously members of the metalcore band called The Afterimage.

How did you come up with such material? How long did it take to create it? Who is the main composer and who writes the lyrics? You mentioned that it's based on Berserk - is it manga or anime? Could you please say a bit more which particular part of the series you decided to focus on? Are elements from that included in music as well or is it only the lyrical theme? Are you all fans of Berserk?

Our upcoming album God Hand took maybe around 4-5 months total to write. Leo handles the instrumental work (Kyle also has a hand in writing), production, mixing & mastering, and Kyle writes the lyrics and does all of the vocal work. The inspiration from Berserk mainly stems from the manga, but we try to draw from both the manga & anime. Kyle is definitely the most knowledgeable when it comes to Berserk plot lines and lore.

Could you say something about the recording of the album? The choice of studio and producer, equipment, specific order of instruments being recorded? How long did it take and what was the process? Any interesting stories from that period?

We handle all recording & production in-house. It's a lot to handle but we feel that we know how our music should sound from a production standpoint, and that we can create best-in-class tracks without any outside involvement.  I think mixing definitely takes the longest as we're extremely picky (which sometimes is to our detriment) but it's worth it for sure. Fun fact: for God Hand, we were mixing up until the day our album was submitted [laughs].

How does the promotion cycle look like for God Hand? Any shows or tours planned? Maybe with some bands from Unique Leader roster? If there are any live shows - how do they look like? Any special effects or specific performance on stage?

Lots of tours and lots of memes of course. Around the time our album comes out, we'll be on the Summer Slaughter tour with some awesome acts… so be on the lookout for that!

What are the plans for Brand of Sacrifice for the nearest future? Creating new material? Touring? Are you involved in any other projects? How do you search for inspiration to create new material? Any "classics" in your musical libraries you would like to share?

Our only plans right now are to hit the road hard and release some awesome heavy music this year! I think our music library consists of everyone we're touring with this summer & the amazing bands we've toured with this year so far (Signs of the Swarm, Cattle Decapitation, Lorna Shore, etc.).