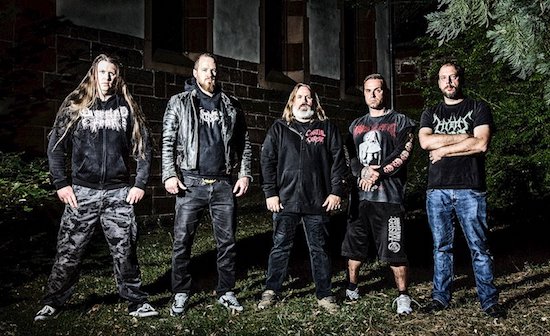 Corrosive is a new discovery for me and I was trying to find some info about the band but there isn't much to be found on the net (laughs), could you introduce the band to us and do the usual where, when and who?

We are the German death metal band Corrosive and we started the band in 1994 when all bandmembers went to school together. We play a mix of Swedish and American death metal with a lot of melodies and we just released our third album.

Thanks for taking time to do this, when I was looking things up I noticed the timing between the releases. 1998 - 2002 - 2004 - 2016 some could say the beginnings were rough? Can you tell us more about those times and how are things nowadays?

In the past years the songwriting process needed more time. The songs were more complex, and we had a lot of different parts in the songs. At those times we also had other members in the band. From 2008 till 2012 we had a band break. After the break we started with new energy and we had other members in the band. Today we have the perfect constellation of personalities. Everything is easier and everyone in the band is involved in the songwriting process. So, we are very fast today in writing new songs.

Ok, back to now. New album premiere just happened a while ago, lyric video is out. Are you preparing anything else; will there be a video for any of the new songs?

We are working on a new video for the song 'God Gives' and we also think about to made a video for our cover version of 'Ghostbusters'.

How long did you work on the album?

We started with the songwriting directly after the Lucifer Gave The Faith release in December 2017. At the end of April 2018, we had the songs for the new album together. In the time from September till November 2018 we did the recordings.

Can you tell us about the process, about the recording itself, and how satisfied are you with the outcome?

We love our new album. Everything is perfect, the sound, the artwork, and i think we had a lot of good songs. At first, we started with a pre-production. After a song was written we recorded the song as a demo version. After all songs were recorded we looked, which songs come on the album. After the song selection we started the recording sessions. We do all recordings by ourselves. Our guitarist Stephan is very fit at home recording. After the recordings our good Friend Andre Skopko mixed and mastered the album for us. And he did a perfect job.

Was there anything that you did differently in the writing process comparing to the previous releases?

How about creating of the music? What are the stages, how do you work on new songs, is it a bunch of guys actually in the practice room, files being shared, or is it something else entirely?

If someone writes a new song, it will be recorded and sent around as an MP3 File. This is how everyone can prepare for the new song. But we want to write more songs together in the rehearsal room for the next album.

How did you make your decision when choosing album cover, can you tell us about the process please?

The cover artwork is a visual mix from the songs 'Field of Corpses' and 'Blind Eyes'. Our bass player wrote these two songs and he had also the idea for the cover artwork.

I don't own the album, and the promo came without the lyrics sheet, so can you tell me about the words a bit, is there a common subject, who is responsible for lyrical layer?

Normally our singer Andy writes all lyrics. However, on this album it is the first time that he was not the only writer of the lyrics. Our guitarist Jona wrote 'Holy Priest' that is about educational priest that like little boys and our bass player Sascha wrote the Lyrics for 'Field of Corpses' and 'Blind Eyes'. The theme of these two songs is war and the destruction of the Earth. Between that, we had songs about witches, and magic on our album. A mix of typical death metal themes and critical themes that are actual. 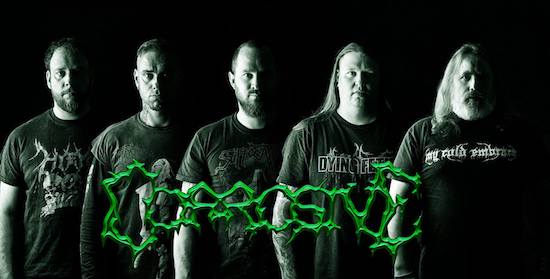 In your opinion, which song from the new album is the best representation of Nourished By Blood?

That is a very good question. In the band everybody has other favorite song. I am a big fan of 'Holy Priest', the next one says 'Shrunken Head Necklace' is his favorite, therefore it is not so easy to say which song is the best representation of the new album.

In my opinion the new album is a complete knock out! All of it!! After the first listen I just sat on my ass stunned, speechless and numb. Can't wait to get my paws on a CD, turn it up to 11 and go nuts. Album will come out on digital format and CD, any plans for vinyl?

Thank you for this compliment. At this time we has no plans for vinyl but we think about it. A lot of people ask for vinyl.

Are you a collector? What do you buy?

Today I am a collector of band shirts. Especially from bands we played with. When I was younger I collected CDs and music DVDs.

What do you listen to lately?

I hear a lot of technical death metal like Obscura or Beyond Creation, but also to a lot of old school death metal.

What are Corrosive plans for 2019, is world domination on agenda?

Yeah, definitely is the world domination on our agenda [laughs] We also think about to release a 25 Anniversary EP or CD this year.

Thanks a lot for taking time to answer all the questions, good luck with everything, last word is yours.

I will take this opportunity to say thank you for the support. I hope we will see you on a show in the future, greetings, Sascha and the Corrosive guys.