"To" is a creation of many un-obviousness's and extremes. Poetry of poems combined with dark / dead content. Musical shot that for many will be simply offensive, and for another it will be a sonic consolation for their sick desires. Charged with dark emotions, spitting nihilism and stabbing ambiguities. Love it or hate it but listen you must. Play the songs and worship Totenmesse. Here is a conversation I had with Void. Enjoy. 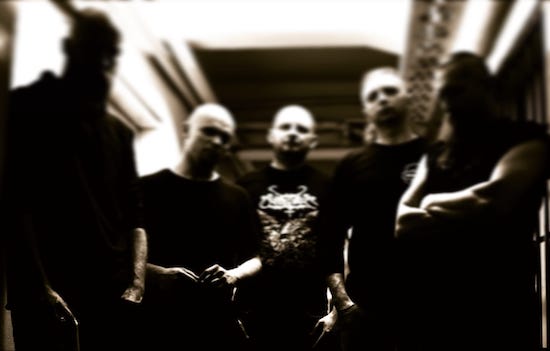 Greetings, what is going on with Totenmesse, from what I see from the first posters, you're slowly getting out of the basements?

Greetings, greetings! I am answering post factum, so first of all I have to correct the issue of our participation or rather our absence at Into the Abyss Fest. Well, as a result of some unforeseen and serious complications, Totenmesse was forced to cancel the performance. Fortunately, things have already been straightened out and we are fully ready to take on new challenges, in accordance to the old rule – what doesn't kill us makes us stronger. As of today, we have confirmed gig on October 12 as part of God Be Gone Now Fest III in Warsaw, where we will appear alongside, among others Infernal War and Moloch Letalis. I assume, however, that some initial plans will probably crystallize in the near future.

Well, since the foreplay is behind us, tell me this: from whose initiative was this filthy creation created - Totenmesse? Did the impulse come from hibernation / split up of Hell United?

Yes definitely. After parting with the drummer, we took a short break from playing. We have found out that the Hell United formula has burned out for the moment, and this creature's existence has been postponed for an indefinite period of time. On the other hand, we have heard strong primary instincts and inclinations to turn to regions we have long regarded as neglected. We asked Priest, with whom we have known each other for years, if he would be interested in participating in the new creation. He was. Soon after, we asked Stawrogin a similar question and got a very similar answer. Initially, we all approached the matter lightly, but as we delved into our common ideas, we began to take Totenmesse very seriously. This way, the loose project turned into a well-oiled machine of decadence and nihilism.

Without going much into the sob story, I have to admit that "To" was for me, the best debut album in 2018, but I do not think you're surprised by its power, right?

Thank you for the good word! We are very pleased that our hard work does not remain unnoticed and there are those who liked our vision of metal. Others apparently need a bit more time. As for our expectations (because I assume that this is what you mean), I will say briefly - everyone knows their work, and the great collective sieve of ideas, even at the basement stage allows to select the best and set them to our goals. And power? That was the assumption.

If I have correctly gone through a record of your musical activity, you have already tried your vocal possibilities on debut album of Eclypse. On "Aura Damage" of Hell United, your vocals sounded really powerful. How did Stawrogin got this job in Totenmesse?

You love to tickle my vanity and I see that you have prepared well, but the answer to your question is relatively simple. Totenmesse was intended to be completely different, it was also supposed to be (in contrast to Eclypse, or the last release of H.U.) a project that oscillated much more in the black metal regions, as I mentioned earlier. All this has been fully realized thanks to Stawrogin. And that's it.

Tell us something. Is Void a fan of metal from flesh and blood outside Totenmesse, that is, does he visit local concerts, looks at what squeaks and squeals in the metal underworld etc. ...???

Heh, I try to be up to date, but sometimes the prose of life makes it difficult for me. Fortunately, thanks to the broadly understood electronic media, you can learn a lot and see a lot of this and that. I admit, however, that no HD technologies can replace those emotions and experiences that become yours while watching a live show, so if I can, I go to a show.

I hoped that your participation in the fourth edition of "Into The Abyss" will be only an introduction to more active concert schedule. We know what happened there, but can you reveal any plans for the future?

As I mentioned earlier, our plans were modified in the last moment by unforeseen random events, which ultimately prevented us from presenting "To" live. We are now planning to focus on the promotion of the album by making it available to the wider public which means right to their faces - live.

Returning to your debut album, I must say that "To" is a very emotional and unobvious album. That was the assumption, is it an expression of your characters?

In fact, each of us has had a share in the creation of the material, and as we are a bunch of weird individualists, the fusion of such attitudes cannot be obvious. Emotions are a natural element of existence and I am glad that we managed to pass them through "To".

The entire graphic design, which came out of Sars's hand (Furia, Wędrowc Tułacze Zbiegi, etc.), perfectly fits into this uncertainty. Tell us about the creation of this cover, is it a pure interpretation of the graphic designer, or is it an expression of your suggestions?

Maybe I'm going to disappoint you, but it will not be a long story with a suspenseful finale. The matter is relatively simple - Sars received material from us to listen to and under its influence began to create layout concepts, which were subjected to a severe assessment by us. Sars has a head not only for music, so we quickly found common ground. And the end result that we are very pleased with is as unobvious as "To".

I assume that you were all aware of the consequences of Priest and Stawrogin's participation in Totenmesse. Especially the charismatic voice of Stawrogin involuntarily evokes comparisons with his earlier publications, Odraza or Biesy. Did it matter to you?

It is the human wickedness that splashes feces in my pupils, as one familiar poet once said. Well, you cannot blame people for the fact that they like to segregate things and toss everything they encounter into properly marked sacks. The more so because the mentioned individuals are actually very characteristic musicians who, in a sense, follow the path of their own style. It seems to me, however, that there are some subtle differences that make it possible to distinguish "Esperalem Tkane" from in this case "To".

Let's touch up on the subject of lyrics, here we will also find another un-obviousness. Black, nihilistic, and yet poetic and with the use of Słowacki's or Broniewski's works. You support the climate of the album with lyrics, are they a weapon to fight the vanity of this retinue?

The songs that we used for "To" perfectly fit into our feelings, and the beautiful lead-edge clasp that links everything to the proverbial nostalgic-destructive thoughts of Stawrogin, Rzulty and our friend Dominik, who supports Licho on a daily basis. All this certainly gave the aftertaste to the music, broken by a bit of uncertainty. It makes us happy.

I can find the last ambiguity and even some musical inconsistency in the King Crimson-21st Century Schizoid Man cover. I noticed some similarities when covering Metallica's "Fight Fire With Fire" by Hell United, but this version of the King Crimson's would not even shame any grind commando. I understand lyrical consistency, but question remains: WHY?

Talking about a possible cover we took into account numbers not fitting into extreme metal, and King Crimson was proposed by Stawrogin. His vision of this number simply took us away. In retrospect, it is clear that this was a great idea, as half of those who associate with "To" hate this interpretation and the other half adore it. This clearly shows that our vision of music arouses emotions. And that's what this is all about.

Shed us a little light of the future, is Totenmesse a band focusing in the area of black / death metal, whether despite or because of their uncompromising nature you plan to look at other musical backyards?

In the near future, we plan to record some new numbers, revealing a slightly different face of Totenmesse, but will we move away from the metal world? Probably not. However, I cannot predict what the future will bring. The only certainty is the inevitable end ...

Thanks for your time devoted to this interview. I hope that this "Funeral Mass" will last, and we will taste the fruit of it in the near future?

I also hope so! Thanks for the interview.