We've covered Haiduk releases on our pages in the past so, when the opportunity to ask few questions presented itself, I sent few questions to dive deeper into this solo project and find out how challenging all aspects of the music business are for just one person. Luka Milojica - the man behind it all, starting from music to graphics, from promotion to sales and ending with booking and touring doesn't seem to be phased by any obstacles, and on contrary, he's ready to take the world by storm with his own vision on what's traditionally perceived as good music or sound. 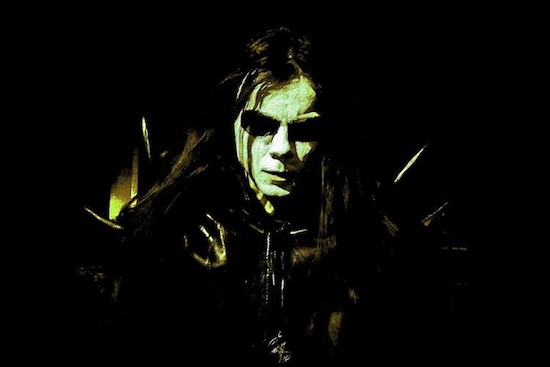 Tell us how it all started? Why did you decide to form a band and what motivates you to keep it going after 10 years of existence?

I was going through a hard time in my life and decided to focus my energy on something I truly believed in which was metal. In 2009 I finally recorded a bunch of songs I'd written over the years which had been collecting dust, and that became the demo 'Plagueswept'.

The motivation is to keep exploring the darkness and to see what kind of twisted and evil songs can be created. It's an endless, bottomless pit to explore.

Why as a solo artist? With so many bands and musicians coming from Canada I can't believe you couldn't find couple more guys sharing your musical tastes.

Haiduk was meant to be a solo project. I try to create a unique sound by doing every instrument my own particular way. I look at writing music like writing a book. It's your own vision you want to bring to life. When one single vision shapes every nuance of every instrument, it creates something powerful and pure.

I'm sure you pay attention to reviews and any criticism that comes after release of each album and you must be aware that your riffs are always the strongest point, but with that in mind why not have other musicians contribute drums, bass and maybe some arrangements to take your music to another level?

I'm more interested in making something different and strange than something considered traditionally good by most people. For me, taking music to another level is about trying to create patterns and atmospheres that have never been heard before, whether that's through riffs, arrangements, or the thousand details that go into mapping the drums.

Do you ever let anyone interfere, maybe that's too strong of a word, but have some input into your band/music at all?

Not really. In the past, some of the final steps like mixing and mastering I would do alongside a studio engineer, so their fingerprints would end up on the final product. Even then, I always have the final say.

Each album displays attention to details, good production, mix, professional layouts and so on... How do you finance all your band activities?

I try to do everything myself so that I don't have to finance anything. I program the drums, record all the instruments and do the mixing. On 'Exomancer' I did the mastering as well, admittedly poorly. The artwork itself usually costs a bit, but after that, I create all the CD layouts, banners, gifs, etc., myself. I promote online, play shows and sell albums to recoup the cost of CD manufacturing.

I believe all your albums share your fictional/fantasy stories. Even-though they are fictional do you share some of your personal moments there or is it pure fiction? Can you elaborate on the world you created?

The themes are all fantasy based. I've long had plans to write a fantasy book and the setting created for it is the fictional world of Callost. This is a realm of constant warfare, demons and black magic, and was described in the 'Demonicon' CD booklet.

Your lyrics are always very short and minimalistic, do you treat them as important part of your music or a necessity?

Music is a more effective tool than vocals to let your mind escape. Lyrics are crafted to reinforce the theme of the song, but also to reinforce the music by acting like another instrument.

Do you ever plan on reaching to record labels to release your material and help spreading the Haiduk name?

Not at the moment. Nowadays artists can bypass labels and get their name out there and do virtually everything independently. I thrive on this and use a lot of non-traditional methods of promotion. Labels are suited towards the touring band setup anyway, which I am not.

Without labels or promotional agencies it must be a lot of work, if not close to impossible to get on cross country tours not to mention playing outside your borders. What are your touring plans?

I play shows but there are no plans for a tour. Haiduk is built as a solo project and therefore shows and tours are not my primary way of promotion like it is for bands. It's no longer necessary for artists to take that route. I've met and found thousands of metalheads and websites online, be it fans or industry people, so when I have something new, I can reach a lot of people.

Is it hard being solo on the scene? I'm sure technically playing back other instruments through the PA is not anything new or complicated, but I'm more interested in how challenging is it for you to keep an audience involved and under your fingertips while being all alone?

There are challenges to being solo. Certain doors will not open for you when you represent yourself. It's important to build connections and be persistent.

Keeping the audience engaged comes down to your playing and doing good sound check. If your playing is tight and the track volumes are balanced, the music will do all the work of getting the crowd involved.

What are your aspirations for Haiduk? Do you believe you can live from music in the future or is it just your hobby?

Right now the focus is on promoting 'Exomancer'. Album promo takes many different forms and I still have a lot of work getting this one out there. Whatever comes next, I stay true to myself, true to metal, and forge ahead!