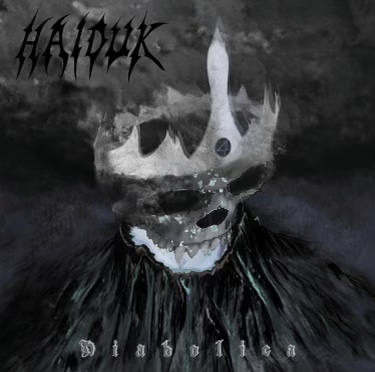 It was in 2018 Haiduk released Exomancer, an album I barely had time to dedicate some time to, however I do remember a few standout things about it, some being the gasped grunting vocals, the frantic riffing assault and the short runtime of the tracks. The album sounded decent production wise and as an overall effort, I could give it an easy 7/10 for the little time spent with it. Here in 2021 the one-man entity has returned with yet another full length to add to his catalogue, Diabolica.

Album number 4, and the formula remains pretty much the same, except it seems the execution has become much better. The production starting off is clear, all instruments standout when they are given the opportunity and there's no interference where the mix is concerned. The vocal style also has not changed much, I'd say however it has become a stronger grunt/gasp in contrast to the ones on Exomancer that sounded slightly faint. I guess you could say they have more impact this time around and blend well with the supporting thump of the drums. Paired with loud melodic tremolo riffs, Diabolica easily is the better of the two mentioned albums from Haiduk.

From an aesthetic, sonic, and lyrical perspective, Diabolica is a damn cold record but fast and unrelenting from start to end. Perhaps that's a product of Canada's freezing temperatures, but there is no doubting that the songs here are just downright mean. From the short, visceral thrash metal styled lyrical compositions that describe sheer menace and hostility to the raging ring of the guitar leads and murderous blast beats, this album places the listener in a cyclone of sonic razors that only intensifies as time goes by.

Just check out songs such as the opener 'Corpse Crown' or 'Swarm' both of which exhibit a feral and primal characteristic that helps Diabolica to sound convincing to say the least. Then the accompanying lyrics amplify the savagery of the music, plus with songs such as 'Wraithavok' being played with such ferocious speed and skill you get the impression Haiduk wants to toss you into a tornado of glass splinters and steel. There's really no letting up where the sonic scars are concerned but even amidst the rancor sits a melodic precision that somewhat contains or cloaks the rage momentarily before it escapes once more. Some favorites on Diabolica such as 'Corpse Crown', 'Swarm' and 'Ballista' utilize this effect to great avail and contribute considerably to the attitude of Diabolica.

You are going to love every aspect of Diabolica, the drumming, short vocal bursts and especially the riffs. Get the album on CD or digitally, Haiduk slays!!